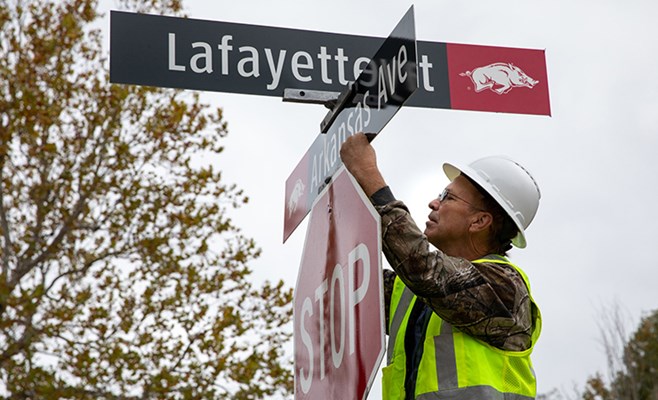 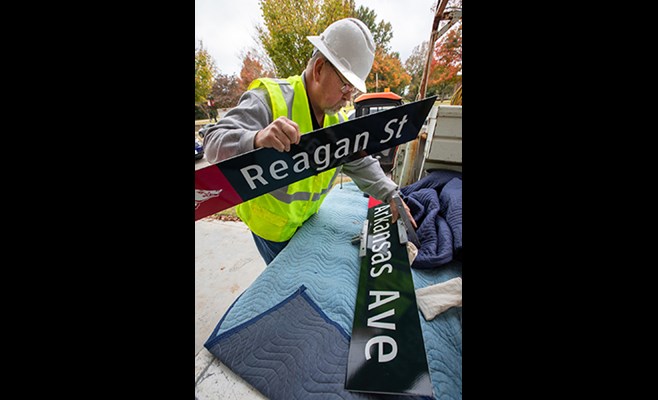 Russell Wills, one of the facilities management crew members who installed the signs, prepares the new Razorback-branded street signs. 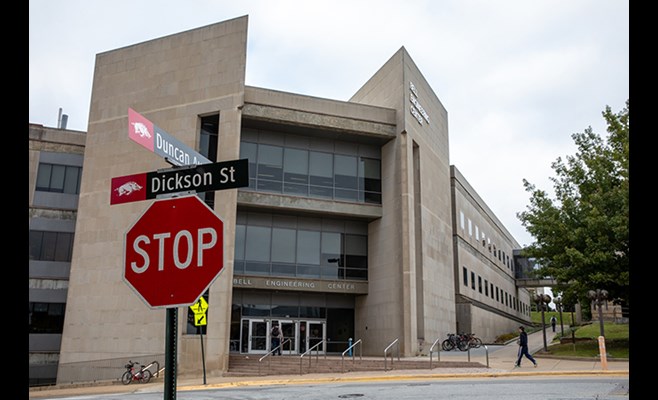 New signs at Duncan Avenue and Dickson Street on the southern edge of campus. 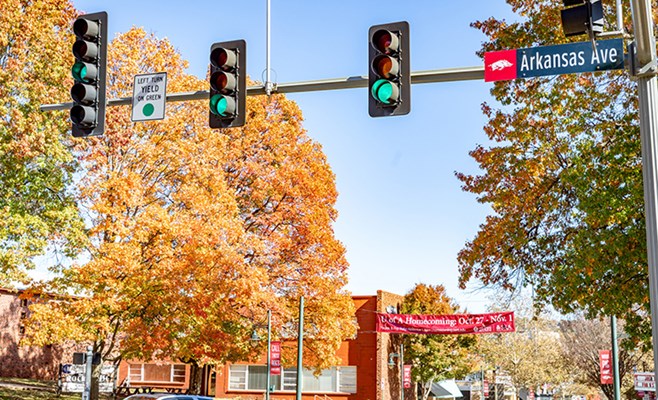 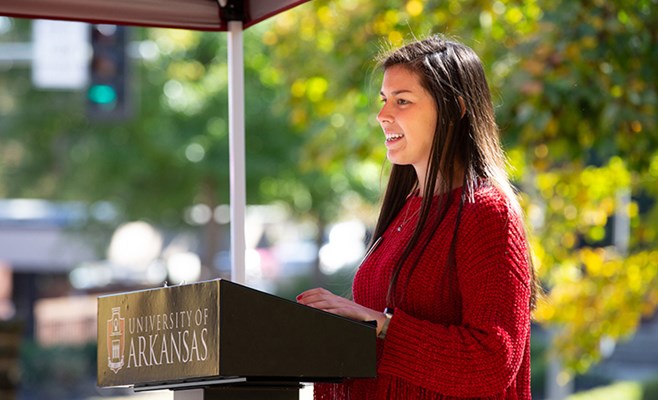 Danielle Zapata, one of the three students who came up with the idea, speaks about the project. 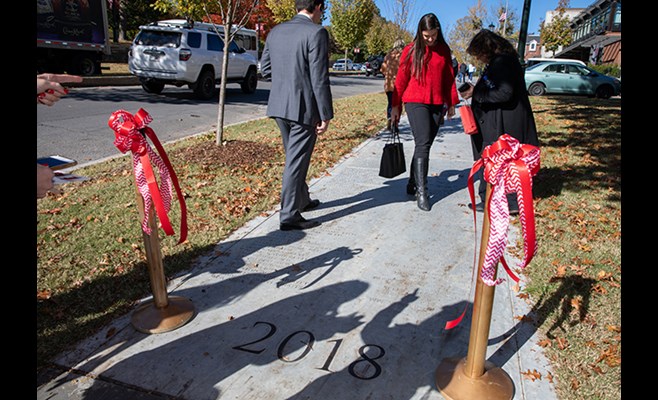 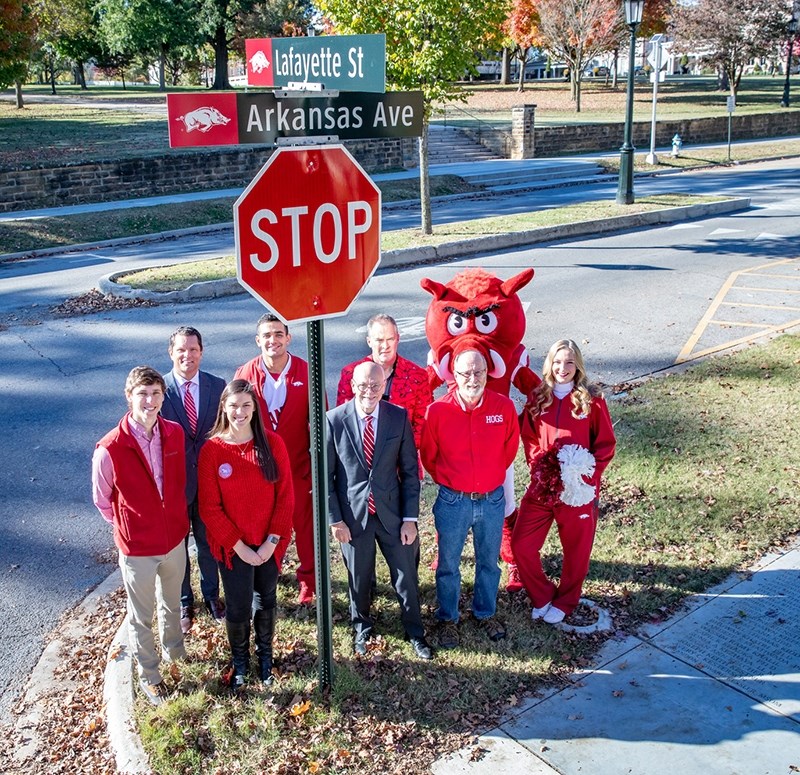 Recent graduates Colman Betler and Danielle Zapata (first row on the left), who came up with the idea with a fellow student, help celebrate the addition of the new street signs with U of A Chancellor Joe Steinmetz; Fayetteville Mayor Lioneld Jordan; members of the Razorback spirit squad; Mark Power, vice chancellor for advancement (back row on the left); and Hunter Yurachek, vice chancellor and director of athletics (left of Big Red).

FAYETTEVILLE, Ark. – Razorback-branded street signs and traffic signal signs are now in place in multiple locations across the University of Arkansas campus thanks to an idea hatched by three recent U of A graduates and collaboration between the university, Razorback Athletics and the City of Fayetteville.

"Knowing that this all started from a discussion among students studying in the library, it's kind of amazing to see the signs all around campus," said Danielle Zapata, who graduated from the U of A in 2018 with a bachelor's degree in biomedical engineering. "We're so thankful that the university, Razorback Athletics and the city not only supported the effort but worked together to make it happen."

Zapata along with Colman Betler and Raygan Mills first talked about the idea early in 2017, before developing an overview and projected cost estimates for the university's consideration. The students presented the idea to the university's executive committee in 2018, when it received initial approval. Razorback Athletics funded the entire project.

"We liked the idea from the beginning," said Chancellor Joe Steinmetz. "The students involved — Danielle, Colman and Raygan — made a great case for the signs which serve as symbols of the pride we share for the university and our beloved Razorbacks."

"We were proud to play a part of helping transform this student led vision into a reality for the enhancement of our entire campus," said Hunter Yurachek, vice chancellor and director of athletics. "It was a tremendous idea inspired by the passion our students have for this university. The Razorback is universally recognized and represents not just our great institution, but the entire state of Arkansas. Now when visitors come to our campus, they will be reminded that we truly are One State rallied behind One Razorback."

The university worked to gain city approval to replace the traditional green and white city street signs with the Razorback-branded signs on city streets on campus including 18 street sign posts as well as traffic signals at three intersections on campus. The university followed city, state and federal regulations regarding size, shape, reflectivity, font size and color while designing the new signs.

"It means a lot to us to have played a part in something that we think really helps showcase our collective Razorback spirit," said Betler, who graduated from the U of A earlier this year with a bachelor's degree in biology. "We realize that even a seemingly simple street sign design project like this takes a lot of coordination and collaboration, and we appreciate all who helped make this a reality."

The signs aren't currently allowed on state-maintained highways on campus, including sections of Razorback Road, Maple Street and Garland Avenue.