Arkansas Stories Continue With On-Site Exploration of Captivity and Resistance 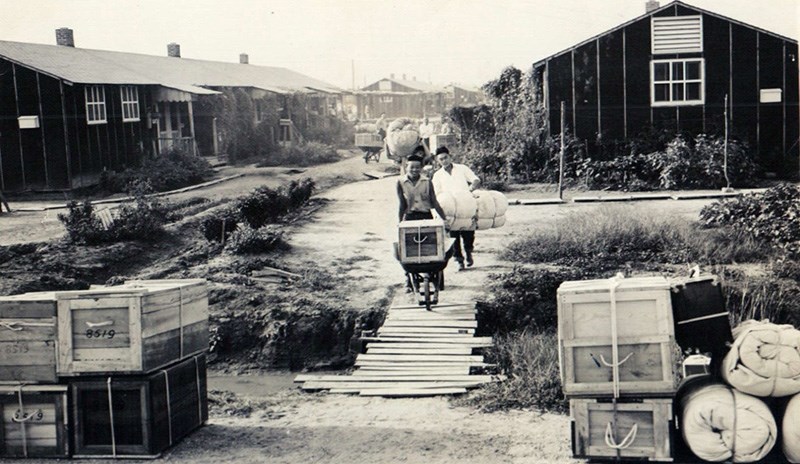 Segregees from a typical block in the Jerome Relocation Center in Dermott, Arkansas bringing hand baggage to the street where they received check stubs before the baggage is transported to the rail head by truck. Photographer: Chas R.Lynn.

FAYETTEVILLE, Ark. – The interactive public humanities series, Arkansas Stories of Place and Belonging, continues this fall with a two-day exploration of “Captivity and Resistance” Friday and Saturday, Nov. 15-16.

“Captivity and Resistance” features presentations and site visits by historians, archeologists and artists whose work delves into the Arkansas stories of Japanese Americans in internment camps, German and Italian prisoners-of-war and African Americans living under Jim Crow Laws during World War II. These events are free and open to the public.

“Drawing on folktale, art, literature and historical documents, the program moves beyond victimhood narratives to engage with how each group navigated and resisted these forms of captivity,” said Kathryn Sloan, professor of history and director of the Arkansas Humanities Center. “This two-day exploration gives voice to the thousands of diverse peoples who left their imprint on our land, our culture and our ideas.”

The first day of events will take place from 4 to 7 p.m. on Friday, Nov. 15, at the University of Arkansas at Monticello, in conference room 102 in the College of Forestry, Agriculture and Natural Resources:

The second day of events will take place from 9 a.m. to 5:30 p.m. on Saturday, Nov. 16, at various sites in Monticello, McGehee, and Rohwer, Arkansas:

Participants will be responsible for their own transportation to each event, but parking will be available.

About Arkansas Stories: The series Arkansas Stories of Place and Belonging is an innovative public scholarship and engagement series at the University of Arkansas, funded by a Chancellor’s Innovation and Collaboration Grant, that brings together scholar-experts, students, and the general public to engage in informed conversations about the region’s fascinating history of human interaction. Utilizing objects and places as focal points to narrate compelling stories of the movement of humans and ideas across centuries, Arkansas Stories illuminates what makes up our common heritage.