Honors College to Present an Evening of Mediterranean Music 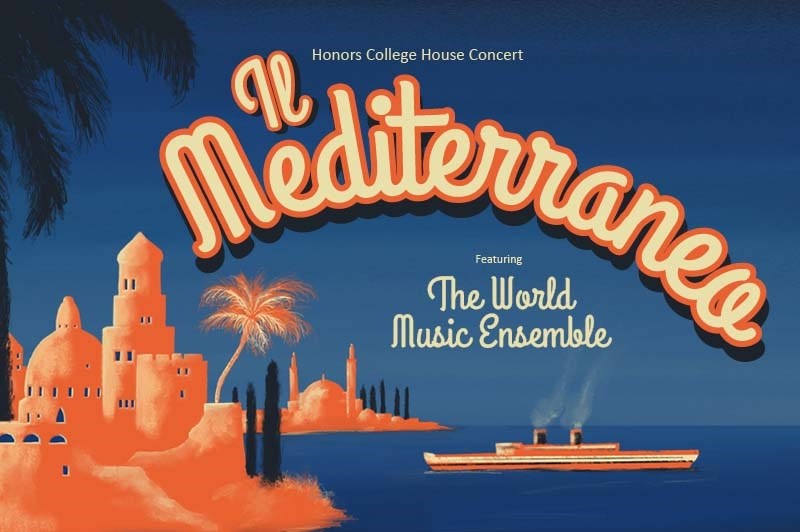 FAYETTEVILLE, Ark. – Fans of eclectic world music should mark their calendars now for the annual Honors College House Concert that will take place at 6 p.m. Thursday, Oct. 10, in the Honors Student Lounge, Gearhart Hall. The World Music Ensemble, led by Nikola Radan, will present Il Mediterraneo, performing music ranging from the traditional tarantella to rebetikos, the gritty jailhouse blues played by Greeks displaced after the fall of the Ottoman Empire.

“When we think of the Mediterranean, we think of Italy, Greece, Spain – but it’s much larger, including the Middle East and North Africa,” said Nikola Radan, a composer, flute player and music instructor in the J. William Fulbright College of Arts and Sciences. “There’s incredible cross pollination between these places due to Mediterranean trade from medieval times until today. So the contemporary music of Naples, for example, is very much influenced by North African music.”

The concert is free and open to all on campus and in the community; light refreshments will be served. As always, the House Concert will take place in the comfortable intimacy of the Honors Student Lounge, room 130, Gearhart Hall. Seating will be limited, so please RSVP and come early to reserve your seat.

Beyond the cultural exchange fostered by trade routes, the music of the Mediterranean was shaped by diasporas such as the expulsion of Jews from Spain in 1492.

“They settled in Greece, Bosnia, Bulgaria, Turkey – and wherever they settled, their Sephardic songs were influenced by local traditions,” Radan said.

Many Greeks who were forced to move from Anatolia (now Turkey) to Greece following World War I lost their professional positions and struggled in their new home.

“Many of them lived as lower-class citizens,” Radan said. “They used drugs like opium to compose these songs of sadness, called rebetikos – like a blues!”

Although the rebetikos were suppressed for many years, with often-graphic lyrics scrubbed clean, there has been a revival of interest since the late 60s.

The program will also include classical compositions, such as Eric Satie’s Gymnopédie No. 2, influenced by Mozarabic music, and Rabih Abou-Khalil’s Nashwa,  which combines Arab traditional music with western jazz, rock and classical music.

The current lineup of the World Music Ensemble includes:

The World Music Ensemble has emerged from a chamber music class that explores world music traditions ranging from West African drumming to medieval Portuguese ballads. In addition to traditional ethnomusicology, the course focuses on high-level performance in non-Western traditions.

The Honors College House Concerts series was launched in 2014 and has featured a wide range of artists, from opera singer and honors alumna Sarah Mesko to a collaborative tribute to Nina Simone. The series is held in the Honors Student Lounge in Gearhart Hall, a beautifully appointed room that provides a comfortable setting for these intimate concerts.