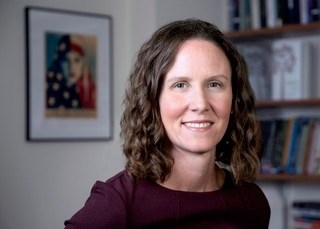 Justine Howe, assistant professor of religious studies at Case Western Reserve University, will discuss the writings of the Muslim Students' Association Women's Committee from 1968 to 1980 in her lecture on Sept. 30.

Justine Howe, assistant professor of religious studies at Case Western Reserve University, will give a lecture titled "Reviving Islam in Cold War America: Writings of the Muslim Students' Association Women's Committee, 1965-1975." The lecture will take place at 4 p.m. today, Monday, Sept. 30, in Gearhart Hall (GEAR) Room 258 on the University of Arkansas campus. The event is free and open to the public.

According to Howe, focusing on women's writings shifts our understanding of how MSA members participated in the global Islamic revival. These publications demonstrate how the mission of da'wa, or renewing and correcting Muslim practice, necessitated building ties with non-Muslims. Aspirational in scope and pedagogical in approach, MSA women's literature shifts our conceptions of the MSA's political and religious priorities during this period, from one of detachment to one of selective engagement with American culture.

Justine Howe specializes in contemporary Islam with a focus on Muslim communities in the United States. Her first book, Suburban Islam, was published with Oxford University Press in 2018. The book examines the role of ritual, leisure, and reading practices in an American Muslim "third space." Howe is also the editor of the Routledge Handbook of Islam and Gender, which is forthcoming in late 2019. Her next book project, Muslim Students and the Making of American Islam, examines the seminal role of the Muslim Students Association (MSA) in shaping the direction of American Muslim communities. Howe has received numerous grants and awards, including her recent selection as a fellow in the Young Scholars in American Religion program at the Center for Religion and American Culture at IUPUI. She currently serves as co‐chair of the Islam, Gender, Women unit at the American Academy of Religion.

This lecture is presented by the Religious Studies Program and the King Fahd Center for Middle East Studies at the University of Arkansas.

About the Religious Studies Program at the University of Arkansas: The Religious Studies Program is an interdisciplinary minor in the J. William Fulbright College of Arts and Sciences at the University of Arkansas that enables students to explore the complex interplay of culture, society, historical traditions, and ideas. For more information, visit the program website at rlst.uark.edu.