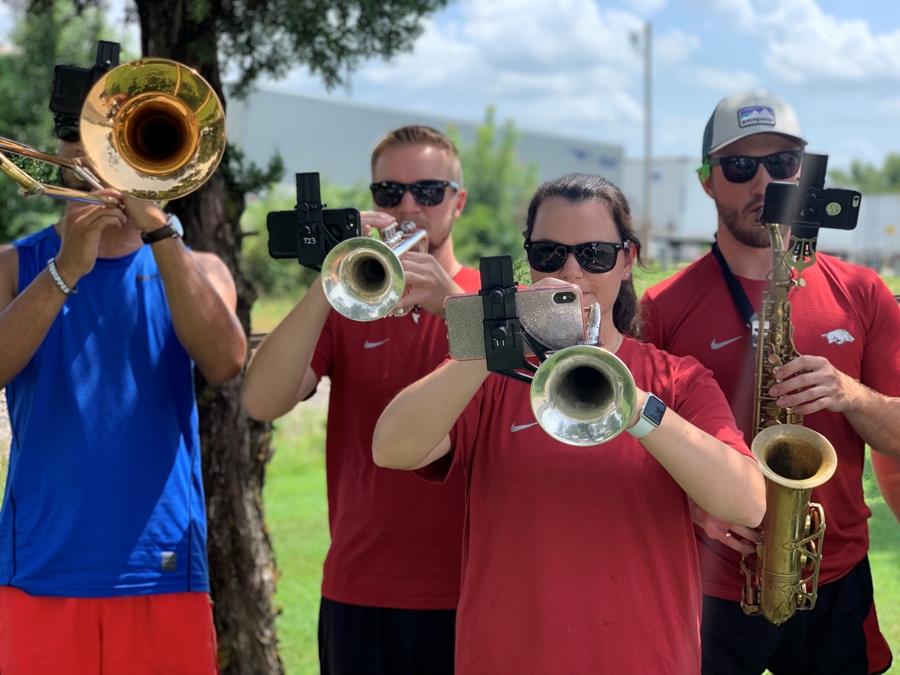 Students of the Razorback Marching Band performing with music downloaded to their phones!

For the first time in its 145-year history, the Razorback Marching Band is leaving paper behind in learning music and marching drill.

Starting this fall, band members will use an instrument-specific lyre called eFlip to attach personal smart devices to their marching instruments or forearms. Marchers can then download sheet music to their smart phone or small tablet via university provided storage to eliminate the use of paper completely, both on and off the field.

Created by the company Tonal Innovation, eFlips will reduce costs by an estimated $10,000 by eliminating over 18,000 sheets of paper music.

"In addition to making the learning process more efficient, it saves our organization money and has a positive impact on the environment," said Benjamin Lorenzo, director of the Razorback Band. "It is important that we stay on the forefront of these advances to continue to be the best we can be, on and off the field."

The Razorback Marching Band will also be going digital learning marching drill by implementing the Ultimate Drill Book app, which will allow marchers to visualize marching formations and relate it to their specific positions by watching animated graphics synced to an audio of the music.

"Time management is crucial to the band's success," said Jamal Duncan, assistant director of the Razorback Band. "We perform 6-7 unique shows every year with sometimes only a week to learn the music and drill. These changes will allow us to maximize our rehearsal time."

Both the eFlip and UDB app are relatively new marching innovations, as UDB's company developed the app in 2017 and the eFlip was designed by members of the Louisiana State University marching band in 2016.