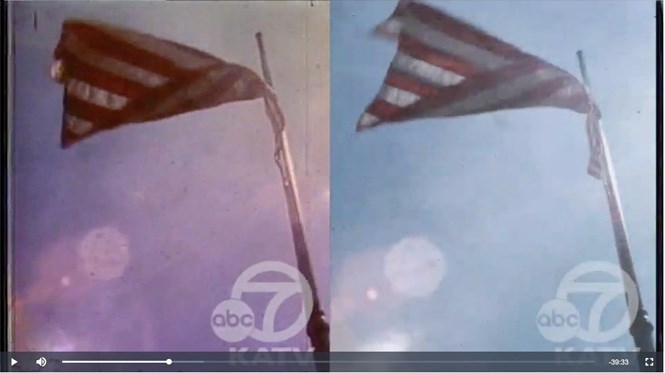 Courtesy of the Pryor Center

Before and after images of a film frame of the American flag, showing color-correction made during the conversion from the KATV news film archive into a digital version offered online by the Pryor Center.

FAYETTEVILLE, Ark. – The first news footage from the KATV archive is now available for public viewing in a searchable format online through the David and Barbara Pryor Center for Arkansas Oral and Visual History in the J. William Fulbright College of Arts and Sciences.

KATV, the ABC television affiliate in Little Rock since 1953, donated 300 hours of news film and another 26,000 hours of videotape news footage to the Pryor Center in 2009. Barbara A. Tyson, Tyson Foods Inc., and the Tyson Family Foundation made a $1.5 million gift to the center in November 2017 to pay to digitize the archive so it could be posted on line.

The Media Preserve in Pennsylvania began digitizing the film archive in June 2018, transforming the film frame-by-frame to a high-resolution format. A before-and-after restoration video shows the significant difference in quality. Handwritten log sheets have also been transcribed and time codes linking the titles to the video files have been added.

“The Pryor Center’s purpose is to preserve Arkansas history and serve Arkansans,” said Bill Schwab, executive director of the center. “I can’t think of a single resource that will be more valuable to researchers, students and anyone who wants to revisit Arkansas people and events from the past 60 years – and maybe even see themselves as part of those events. I think everyone here at the Pryor Center has a right to be proud of the work they’ve done making this happen.”

The Pryor Center has posted the earliest film transfers and descriptions in a searchable format on its website and will continue adding to this first phase of the KATV Preservation project in the coming weeks.

Next month 26,000 videotapes are scheduled to be shipped to The Media Preserve to be digitized over the following year. As the digital files are returned to the Pryor Center they will be posted in the second phase of the KATV Preservation project.

The KATV archive is one of the largest of any local television stations in the country. When the station began broadcasting in 1953 all news footage was captured on film, and KATV kept much of that film; however, in 1960 a fire at the station destroyed the existing news footage.

The station made the transition from film to videotape in the late 1970s and news director Jim Pitcock used the opportunity to create the KATV News archive. He had historically significant film footage gathered and catalogued, with handwritten "log sheets" with a descriptive title for each clip. Pitcock had the film clips transferred to U-matic videotape, and developed an archival system that became known as the Master Cassette Reel system, which served as the model for later KATV newsroom archiving systems.

Today, the Pryor Center fills a suite of offices and studios at One East Center Street on the Fayetteville Square. It has a staff of seven full-time and five part-time employees, top-of-the-line digital video studios and editing suites, plus additional equipment that can produce documentary-quality video interviews from anywhere.

For more information and updates, visit the Pryor Center's website at pryorcenter.uark.edu.