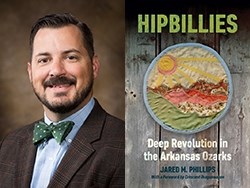 FAYETTEVILLE, Ark. – Jared M. Phillips, author of Hipbillies: Deep Revolution in the Arkansas Ozarks ($27.95, paper), will be part of a panel discussion and book signing in a featured event of the Fayetteville Roots Festival.

The panel discussion will be at 3:30 p.m. Sunday, Aug. 25, at the Fayetteville Public Library.

The discussion, titled “I Was Cornbread When Cornbread Wasn't Cool: Nouveau 'Zarks and How Hipbillies Revolutionized the Ozarks,” will also include Crescent Dragonwagon and Guy Ames and will be hosted by KUAF's Jacqueline Froelich.

The event is  free and open to the public.

Hipbillies documents how back-to-the-landers created their own haven off the beaten path in the Arkansas Ozarks in the 1970s. The book combines oral histories and archival resources to weave the story of the Ozarks and its population of country beatniks into the national narrative, showing how the new arrivals engaged in “deep revolution” by sharing their ideas on rural development, small farm economy, and education with the locals — and how they became a fascinating part of a traditional region’s coming to terms with the modern world in the process.

Phillips is assistant professor of international studies at the University of Arkansas. He lives and works on a small farm outside of Prairie Grove. Dragonwagon, who wrote the forward for Hipbillies, is the author of more than 50 published books and a winner of the James Beard Award and Coretta Scott King Award. She has lived as a “hipbilly” and is a co-founder of Dairy Hollow House, now the non-profit Writers' Colony at Dairy Hollow. Guy King Ames operates Ames Orchard and Nursery and has sought alternative lifestyles in harmony with nature in Northwest Arkansas.