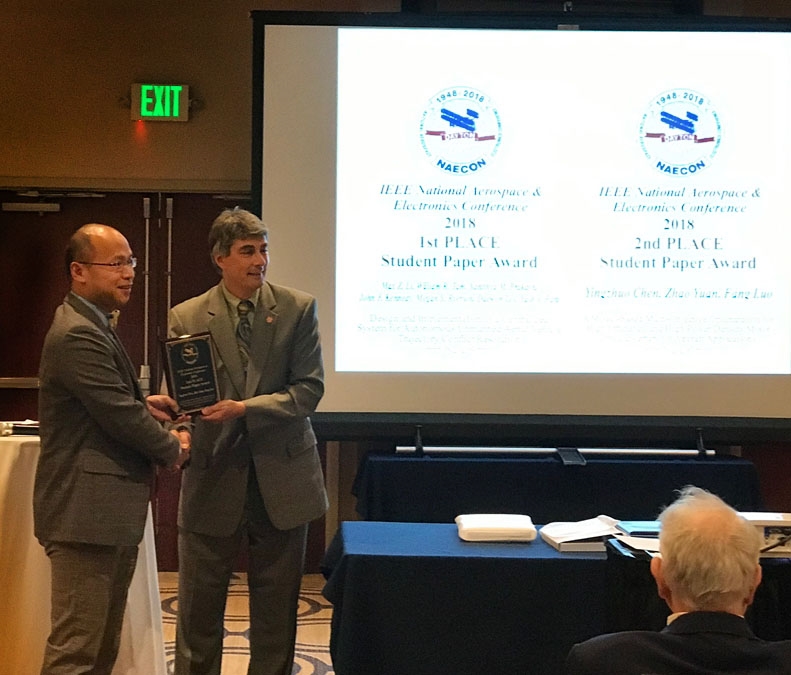 A University of Arkansas electrical engineering graduate student and professor, along with a collaborator from The Ohio State University, have received an award from the Institute of Electrical and Electronics Engineers National Aerospace Electronics Conference for their research paper on developing efficient power electronics for electric aircrafts.

Assistant professor Fang Luo and his former and current students, Yingzhuo Chen and Zhao Yuan, placed second at the 2018 NAECON paper award and received a plaque during the NAECON 2019 in Dayton, Ohio. The research paper was titled "A Model-Based Multi-Objective Optimization for High Efficiency and High Power Density Motor Drive Inverters for Aircraft Applications." Luo said the goal of this research presents a model-based design method, which enables multi-objective design optimization across different physics domains.

This new method will help designers understand the system-level trade-offs during the beginning phase of a project, which Luo said could help researchers reduce the risk of failure.

Chen, who was Luo's student at Ohio State, initially worked on this model-based design and Yuan, his current student, decided to continue the research under his supervision.

Yuan said the research has important implications for the future of transportation and the environment.

"This research is mainly for the application of more-electric and all-electric aircraft, which has very strict requirements on power-electronics converters on both output efficiency and power density," he said. "The method we use is to globally optimize the system to reach both the satisfactory efficiency and power density, by modeling and considering all the necessary components in the circuit. The optimization is designed to fully exploit the potential of well-developed technologies, which reduces the risk and design failures of the project."

Luo said researchers are focusing more on all-electric aircrafts because it's a vital step for the aviation industry to transition from fossil fuel to electrification.

"It helps to reduce the overall CO2 emission from the aviation industry, reduce the cost of airlines and potentially increase the reliability and safety of air transportation," he said.

Luo said switching from fossil fuel to electrification could also benefit many other industries.

For the team, receiving the paper award was an honor because it validated that their work could solve future problems. Juan Carlos Balda, head of the Department of Electrical Engineering, said the award represents the quality of electrical engineering research at the university.

"Awards for student papers are a testimony of the quality of the research work produced by our graduate students, who are without any doubt performing state-of-the-art research," Balda said.

The team said they would continue working on this research and using the tools in other projects.