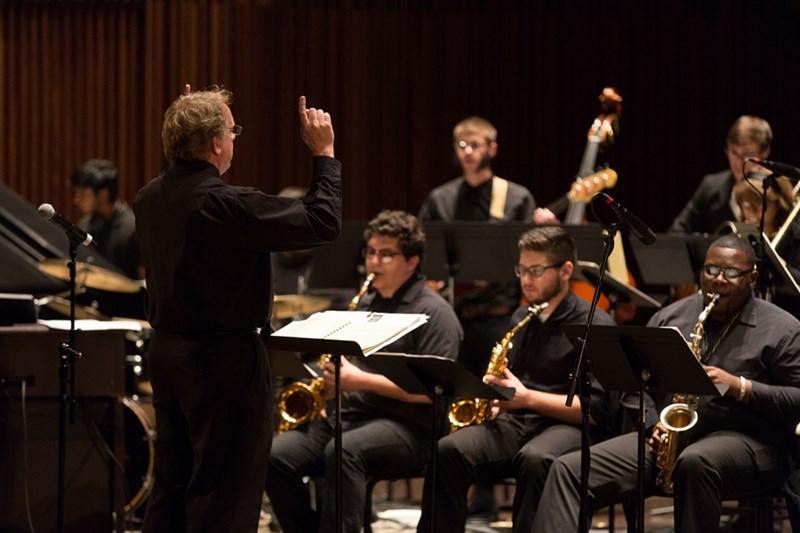 The Department of Music in the J. William Fulbright College of Arts and Sciences at the University of Arkansas is excited to announce the offering of a new degree in jazz performance. The degree, a Bachelor of Music with a concentration in Jazz Studies, features courses specifically designed for jazz-focused musicians in improvisation, history, analysis, and pedagogy. The new degree is housed in a formalized Jazz Area within the Department of Music.

Two long-time music faculty at the University of Arkansas, Jim Greeson and Gerry Sloan, established space for jazz education and ensembles during their tenure on the faculty. Now both retired, Greeson and Sloan's legacies continue in jazz performance on campus with current ensemble faculty Rick Salonen and Claudia Burson. A suite of new and existing ensemble offerings provide a wide-range of jazz performance for students including jazz combos, the World Music Ensemble, the Latin American Music Ensemble, and the University of Arkansas Jazz Orchestra. Additional performance groups such as the Arkansas Soul Band and the Songwriters Ensemble provide popular music opportunities within the program.

"The Department of Music has offered jazz for decades," said Ronda Mains, chair of the department. "We have wonderful jazz musicians on our faculty and have always supported the jazz community in Northwest Arkansas. Building on that foundation, we have hired a number of talented faculty members who can take our jazz offerings to the next level and offer our students a more complete experience in jazz studies."

Associate Dean Steve Beaupre noted that "the Fulbright College is thrilled with the establishment of our new jazz degree program. We anticipate a high level of interest from students and rapid growth. As a jazz fan myself, I couldn't be happier!"

"It's a great moment for this department," said Hertzog, "the addition of a jazz degree creates all sorts of opportunities for students not only in jazz, but to build on that jazz and classical foundation for all sorts of careers music." The department is grateful for its institutional and community support and is looking forward to an exciting first year of the jazz program.

Over the coming weeks, the department will announce further news and special events to commemorate the first year of the new Jazz Studies program!