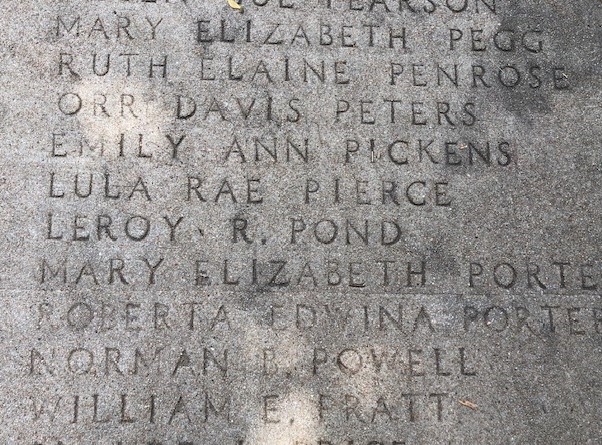 Leroy Pond's name is on senior walk in front of Old Main as member of the U of A class of 1938.

Leroy Pond Drive, south of Bud Walton Arena, is one of the busiest roads on campus - especially during basketball season. It will probably get even busier after construction is finished extending the street across Razorback Road to connect to South Graham Avenue.

But few of the people who use Leroy Pond Drive realize it is named after a person who was a local hero in World War II.

Leroy Pond was born in Fayetteville and graduated from the University of Arkansas in 1938.

He was deeply involved in U of A life as a student, with a term as president of Lamda Chi Alpha Fraternity and secretary of Associated Students, selling advertising for The Arkansas Traveler and serving in the Reserved Officer Training Corps.

That was the start of the Normandy Invasion. More than 6,000 Allied ships and almost 160,000 troops invaded France, taking the ground war to Nazi-occupied Europe.

Capt. Pond was leading a rifle company, A Company, First Battalion, 359th Infantry Regiment, 90th Division, heading to the portion of the northern French coast that the Allied planners had named Utah Beach. Their troopship hit a mine and sank, forcing the survirors to swim ashore, under fire, gathering weapons and equipment where they could find them on the beach, and then fighting their way inland.

British author Douglas Botting described the scene on Utah Beach: "An endless stream of men, tanks, guns, vehicles and supplies poured onto Utah from the sea. The distant German guns kept up a sporadic fire, but they did not loosen the American grip on the beachhead…. The Americans desperately needed more routes off the beach, and during the morning they got them. One by one the strong points guarding roads inland … fell to the assault troops, and by the end of the morning three exits from the beach were in American hands."

For his part, Leroy Pond wrote to his family that he had gone swimming on his birthday. It was his only mention of his D-Day experience.

Capt. Pond earned the respect of his men and his commanding officers for his combat performance and his leadership, on D-Day and in the months that followed.

Pond did not survive the war. He was wounded in Germany in December, 1944 and died from his injuries in a hospital in England the next month.

Back home at the University of Arkansas his wartime heroics were remembered and recognized with the creation of "Camp Leroy Pond" on campus -- a housing area for male students who were returning home after the war. It was located south of Razorback Stadium in the area where Bud Walton Arena now stands.

The main road that ran through the camp was named, appropriately, Leroy Pond Drive.

A related article about Pond and the details of the Leroy Pond Drive extension is on Transit and Parking's Talk T&P website.