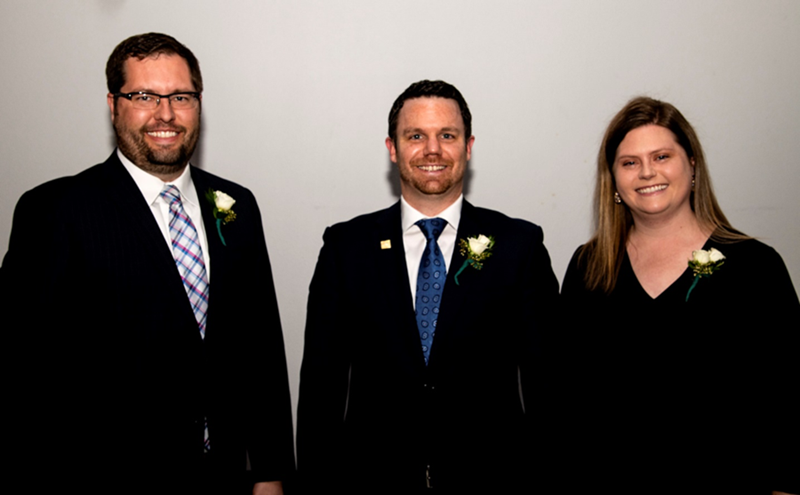 The Arkansas Academy of Biological and Agricultural Engineers has inducted three new members.

Cory Scott grew up in Little Rock and graduated from Catholic High School in 2001. Scott received his B.S. in Biological and Agricultural Engineering from the University of Arkansas in 2005. After graduating, he worked for Tyson Foods in quality assurance and J.B. Hunt as a independent recruiter before returning to the University of Arkansas to pursue his Master of Business Administration from the Sam M. Walton College of Business. While pursing his M.B.A., Scott worked as the portfolio manager for the graduate student managed fund, The Shollmier Fund.

Outside of work, Scott serves as a private sector member on the Arkansas Data and Transparency Panel as Senate Pro Tempore Dismang's appointed delegate. He also is a former board member of the Alzheimer's Arkansas and was profiled in the Arkansas Democrat-Gazette for his charitable work benefiting Alzheimer awareness in Arkansas. Scott was recognized as a member of the 2018 class of Arkansas Business "40 Under 40."

Scott lives in Fayetteville with his wife of six years, Amber, and their son, Camden, and daughter, Harper.

After graduating with her M.B.A., Temple began her career with the Arkansas Department of Environmental Quality as a staff permit engineer. She is currently a licensed professional engineer working as an engineer supervisor at the Office of Water Quality at the Arkansas Department of Environmental Quality, where she supervises industrial stormwater, regulated municipal separate storm sewer systems, and individual NPDES permitting sections.

After graduation, Tate worked at Beaver Water District in Lowell. There he gained extensive laboratory experience while working in the Environmental Quality Department. He also worked at the Beaver Water District's new pilot plant, where he conducted the initial startup plant testing and assistant with a project that studied disinfection by-products.

Tate currently works as the project manager and process engineer at the Garver's Water Design Center. While working at the Garver's Water Design Center, he has worked on a variety of projects that evaluates wastewater treatment capacity and operations, designs and models biological processes, and handling solids. He has been involved in over fifteen wastewater treatment plant projects with roles ranging from conceptual design to construction administration. In addition to these design and construction responsibilities, Tate also serves as Garver's primary biological modeler and has been involved in the development of several GPS-X process models that have been used to guide recommended improvements.

The process for this year's induction began last summer, with nominations from current members of the Academy. Each inductee "shall hold a degree in Biological or Agricultural Engineering from the University of Arkansas at Fayetteville granted at least 10 years prior to election" and is recognized for outstanding contributions to the field of biological or agricultural engineering, according to the Academy.

The induction ceremony took place April 12 at Mermaid's in Fayetteville with more than 120 attendees.

For more information about the Arkansas Academy of Biological and Agricultural Engineers, visit the academy page.