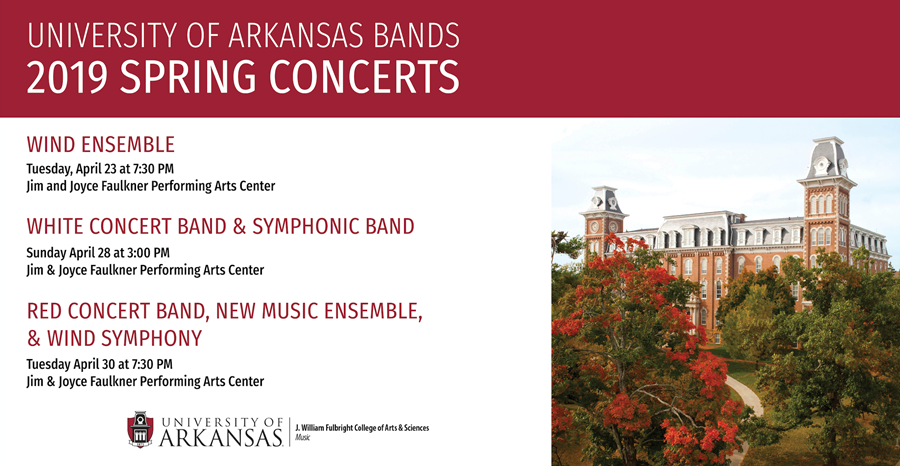 FAYETTEVILLE, Ark. — University of Arkansas Bands will perform three concerts to celebrate the end of the spring semester at the Jim and Joyce Faulkner Performing Arts Center.

The work of David Maslanka will be featured by three bands, led by the Wind Ensemble's performance of Give Us This Day: A Short Symphony for Wind Ensemble. During his career, Maslanka (1943-2017) became a prolific and profound composer for wind band creating meaningful and challenging pieces that are accessible to a wide range of performers.

"The music on these concerts represent a wide range of established and emerging compositions," said Jamal Duncan, assistant director of bands. "Performing classics alongside new music by new composers allows our students to enjoy a comprehensive repertoire."

The Wind Symphony concert will be highlighted by a performance of Percy Grainger's masterwork, Lincolnshire Posy. Percy Grainger (1882-1961) was born in Australia and moved to the U.S. in 1914. He composed more than 1,200 works and was a true innovator in writing for wind bands. Up until that time, the repertoire for band relied heavily on transcriptions of orchestral music.

"This series of concerts is also a time to express our gratitude for our graduating seniors," said Benjamin Lorenzo, associate director of bands. "These students have been valued members of our program and we wish them the very best as they embark on the next chapter in their lives."

Links to each concert's livestream and repertoire can be found on the program's website. Tickets can be purchased through the Faulkner Performing Arts Center.

About the University of Arkansas Bands: The University of Arkansas Bands Program, inside the Department of Music in the J. William Fulbright College of Arts and Sciences, began in 1874 and is one of the oldest band programs in the country. The program has six ensembles including the Razorback Marching Band, Hogwild Band, and five concert bands with over 400 student members representing every college at the university.