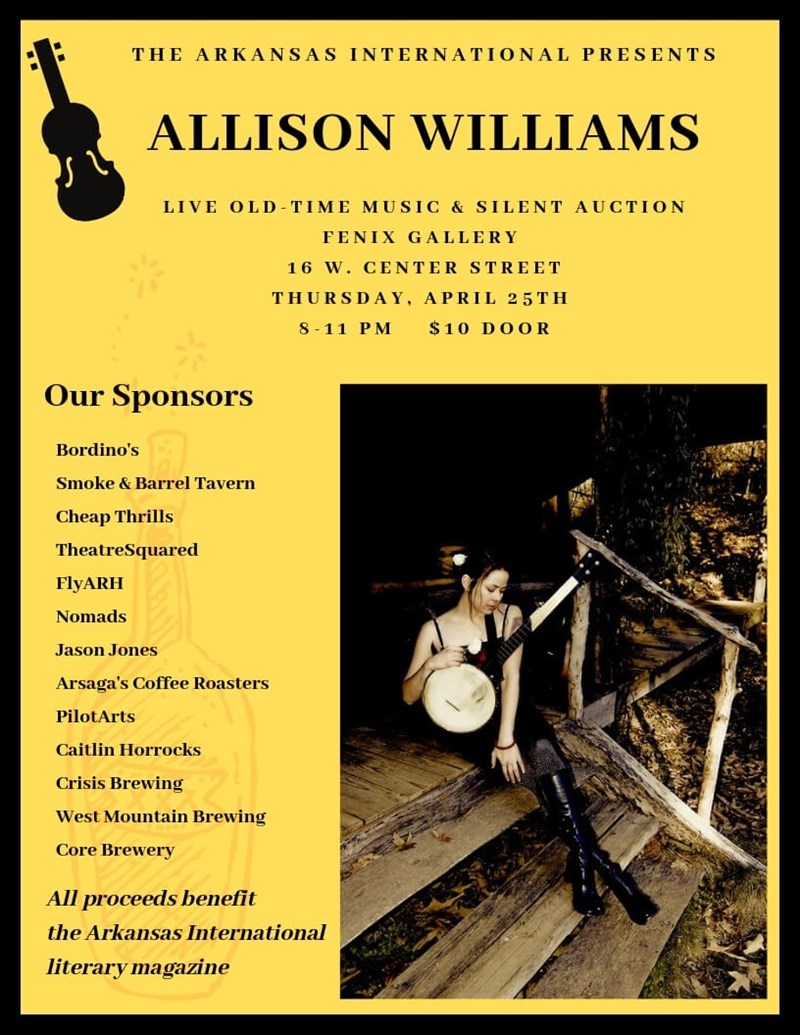 FAYETTEVILLE, Ark. – The Arkansas International, the biannual literary magazine and nonprofit organization run by the M.F.A. Program in Creative Writing and Translation at the University of Arkansas, is hosting a benefit concert and silent auction from 8 to 11 p.m. Thursday, April 25, at the Fenix Gallery, located at 16 W. Center Street in Fayetteville.

The concert will feature a performance by Allison Williams, a Fayetteville-based singer-songwriter, multi-instrumentalist, and roots musician.

Admission is a suggested donation of $10 at the door, and beer from Crisis Brewing, West Mountain Brewing, and Apple Blossom Brewing will be available at the bar. All proceeds go toward funding the seventh issue of the Arkansas International.

"As a nonprofit organization, this auction is an important event that helps finance both future publications and pay our contributors," said Claire Pincumbe, the magazine's managing editor. "Showcasing local art and roots music in support of international literature is what the Arkansas International is all about."

About Allison Williams: Singer/songwriter and traditional musician Allison Williams plays old-time clawhammer banjo in a modern context. A native of the Arkansas Ozarks, Allison got her start as a punk rock musician before rediscovering her musical roots. In 2005 she formed the Forge Mountain Diggers, a hard-driving old-time band, with Freight Hoppers fiddler David Bass.

Allison Williams' solo CD Give Me the Roses features driving arrangements of traditional old-time songs, as well as eclectic originals, woven together by a talented backing band of rising stars, including alumni of the Carolina Chocolate Drops and Old Crow Medicine Show, among others. When not on the road, Allison does live and studio sound, works with Southern folklore, and plays string bass in Western Swing and jug bands.