SEFOR Cleanup Work Finished, U of A Awaiting Final Approval From State 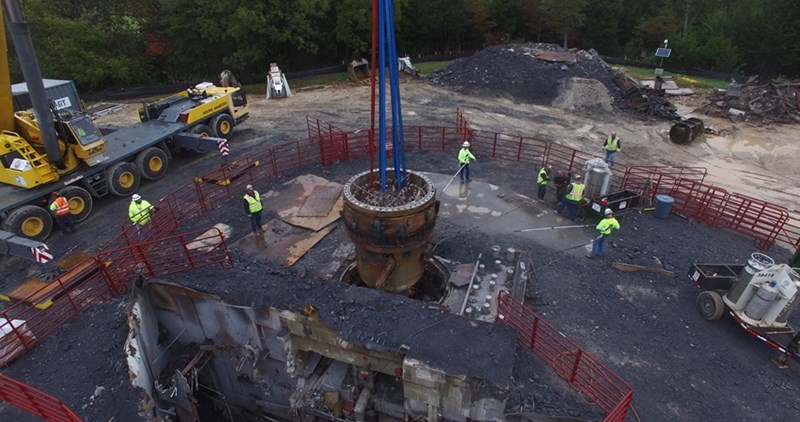 The SEFOR reactor being removed from its container in October, 2018.

Officials from the University of Arkanas and its contractor, EnergySolutions Inc., announced that work on the SEFOR decommissioning project was complete during a community meeting and celebration Thursday, April 18, at the Strickler Fire Department Community Center.

John T. Sauger, executive vice president and chief nuclear officer for EnergySolutions, told the group that all of the structures on the site have been demolished and removed, that all radioactive material has been cleared from the site – including the reactor core and container – and that the location is once again an empty field.

“EnergySolutions has done as outstanding job and has been a great partner in this project, finishing their work on time and under budget,” said Mike Johnson, U of A associate vice chancellor for facilities. “I hesitate to say the project is ‘complete,’ however. The final reports need to be reviewed by the Arkansas Department of Environmental Quality, the Arkansas Department of Health and the U.S. Department of Energy. When they officially tell us that ‘No Further Action is Required’ – then I’ll be ready to say the job is done. I hope we will get that finding by the middle of next month.”

The decommissioning project is wrapping up roughly 45 years after SEFOR ceased to operate as a small test nuclear reactor. It was acquired by the U of A in 1975 for instrument calibration and research, but has not been used for those purposes since the early 1980s. The university has essentially served as a caretaker for the property since that time.

The decommissioning project is funded with just under $24 million in grants from the U.S. Department of Energy, secured with the help of U.S. Rep. Steve Womack and U.S. Sen. John Boozman.

“The University of Arkansas can’t thank Congressman Womack and Senator Boozman enough,” said Chancellor Joe Steinmetz. “Without their work in support of this project it simply could not have been done. The Department of Energy grants have enabled us to remove a significant drain on U of A resources used in the upkeep of the SEFOR facility. I also want to echo the praise for the work done by EnergySolutions – and of course recognize the outstanding job done, as always, by Mike Johnson in guiding this project through to its successful conclusion.”

SEFOR was built near the Strickler community in Washington County in 1968. The test reactor was funded by the U.S. Atomic Energy Commission and operated from 1969 to 1972 by the Southwest Atomic Energy Associates, a group of 17 investor-owned electric utilities. SEFOR was fueled by plutonium oxide-uranium oxide and was developed to get the data needed to design and operate large-scale commercial sodium-cooled reactors.

SEFOR was shut down after its experimental program ended, its nuclear fuel and sodium coolant were removed and disposed of off-site, and it was officially deactivated in 1974.