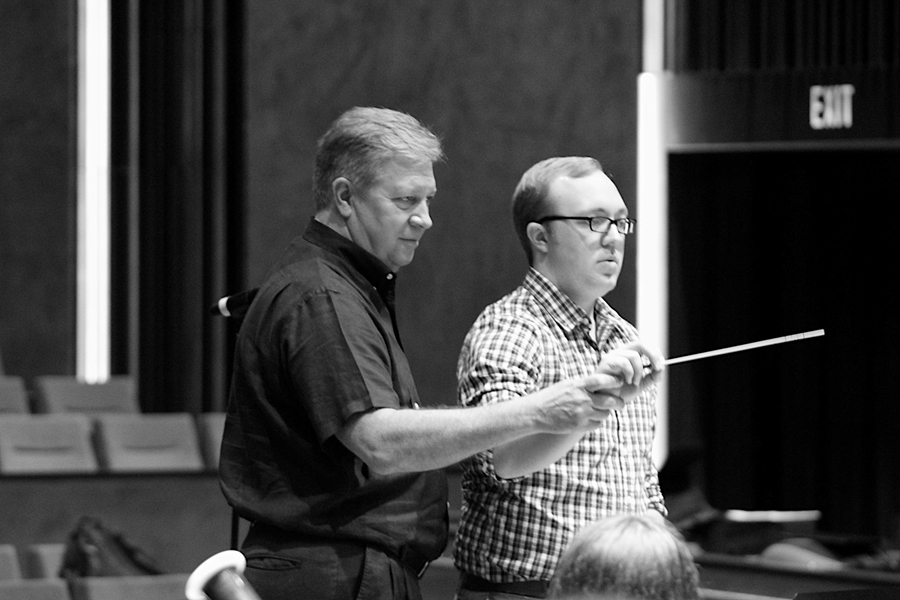 FAYETTEVILLE, Ark. – Christopher Knighten, director of bands in the Department of Music, has been elected to the American Bandmasters Association. The organization honors outstanding achievement by invitation to membership and strives to enhance the concert band and its music by example and leadership. Some 300 conductors and composers throughout the United States and Canada are members.

"It is a great honor to be elected to an organization committed to maintaining the tradition of excellence in band performance, research, and musical contributions to our culture," said Knighten.

In 2012, Knighten was promoted to director of bands and assumed oversight over all aspects of the band program including conducting the Wind Ensemble, leading the graduate instrumental conducting program, and teaching conducting as well as band literature courses.  Since his appointment as director of bands the Wind Ensemble, a select group of the university's finest woodwind, brass, and percussion players, has been invited to perform at the 2014 and 2016 Southwestern Division conferences of the College Band Directors National Association (CBDNA) in Fayetteville and Boulder, Colorado.

Knighten currently serves as president of the Southwestern Division of CBDNA. In 2015 the Wind Ensemble performed in the Meyerson Symphony Center in Dallas and last fall the 60-member ensemble completed a three-day performance tour through Arkansas, Mississippi and Tennessee featuring music inspired by the Civil Rights Movement in the South. The Wind Ensemble is a semi-finalist for the 2018-2019 Ernst Bacon Award in American Music Performance.

Knighten joined the U of A as director of athletic bands in 2009. During his tenure, the Razorback Marching Band grew to more than 350 members and performed at the FedEx Liberty Bowl in Memphis, TN, the BCS Sugar Bowl in New Orleans, LA, and the AT&T Cotton Bowl in Dallas.

Before coming to the Hill, Knighten served on the faculties at East Carolina University, Baylor University, and taught instrumental music at Richland High School in North Richland Hills, Texas.

Election to the American Bandmasters Association is a seven-month process that involves being nominated and sponsored by several current members, submission of performance recordings, and a review of professional contributions.

Janzen expressed his excitement at having Knighten join the prestigious group.

"In addition to the honor of being included in ABA, It has given me the opportunity of connecting with longtime friends in the profession, as well as associating with the famous and influential persons of whom I had only heard of, or played their compositions," Janzen said.