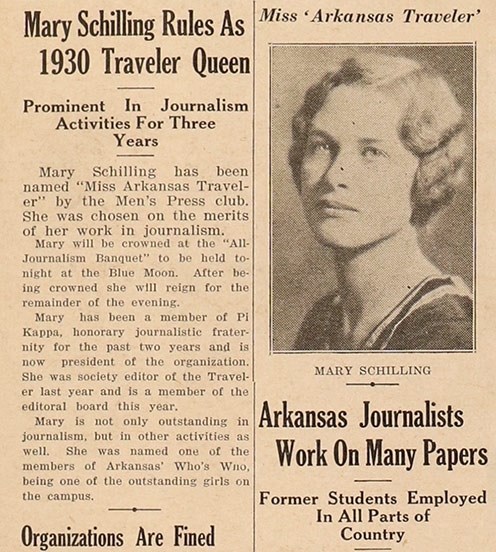 The University Libraries have digitized the first issues of the Arkansas Traveler student newspaper from 1907 to 1947.  The first phase of the digital project is composed of 1,042 issues or roughly 4,780 single scans. The collection is now searchable online.

The University of Arkansas' first student newspaper, the University Weekly, made its debut Oct. 10, 1906. When students expressed interest in changing the name of the paper, a contest was offered with a $5 reward for the best name. The Arkansas Traveler won, and the first issue by that name was released on Feb. 17, 1921.

The Libraries' collection of student newspapers begins with the Nov. 21, 1907, issue that includes stories such as "Periclean Society Elects Officers" and "Sapphic News," which featured a call for the best paper on "Ideal Womanhood."

"My time at the Traveler has been a worthwhile experience," said Nicoll. "Serving as the editor for the past two years has taught me more about media and this profession than I ever could have dreamed. Student media and the newspaper are paramount for aspiring journalists to take part in because they provide real-life, professional opportunities that have helped me, for instance, prepare for my career in this field."

The Libraries are raising funds for the digitization of the remaining 80 percent of Arkansas Traveler issues during this year's All in for Arkansas campaign.