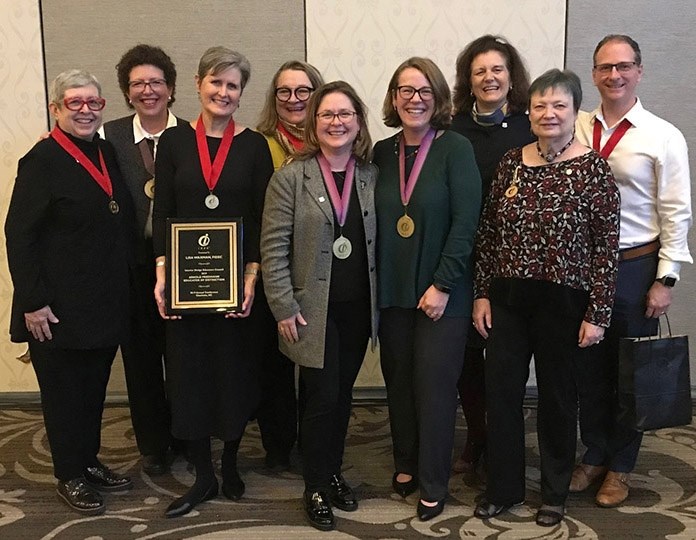 Professor Jennifer Webb, fourth from right, is shown with the Council of Fellows at a recent Interior Design Educators Council conference.

FAYTTEVILLE, Ark. – Jennifer Webb, a University of Arkansas professor, was recently inducted into the Council of Fellows by the Interior Design Educators Council. This is among the highest honors the organization bestows.

Webb is an associate professor of interior design in the Fay Jones School of Architecture and Design. She has been a member of the Interior Design Educators Council for the last two decades and has held more than 12 leadership positions in the organization.

Fellow status "is a professional membership category designed to honor an IDEC member who has made outstanding contributions to the Interior Design Educators Council," according to the organization's website. The honor recognizes a member who has demonstrated sustained and significant participation in the organization via its many leadership and service opportunities, as well as ongoing and valuable contributions to interior design education such as the advancement of the body of knowledge, advocacy of interior design or education, or the advancement or development of any organizations that support interior design education.

"Induction into the IDEC Council of Fellows is an utterly deserved national honor for Jennifer Webb," said Peter MacKeith, dean of the Fay Jones School. "The recognition accords with the growing national prominence overall of the Department of Interior Design, its faculty, its students and the professional education it provides. Dr. Webb is a valued colleague, an acknowledged academic leader and a deeply committed educator."

"Dr. Webb is a dedicated advocate for the discipline of interior design," said Carl Matthews, professor and head of the Department of Interior Design. "Whether through teaching, research or the many service roles she has undertaken, her commitment to excellence is an inspiration to all her students and colleagues."

Webb has taught at the U of A since fall 1999, when the interior design program was part of the Dale Bumpers College of Agricultural, Food and Life Sciences. The program joined the Fay Jones School in summer 2010 and is now a Department of Interior Design.

She generally teaches third-year design studios, which she greatly enjoys.

"The students have really developed their skills, and they are preparing to go out to internships, and I get to help them knit the parts together for the professional world," she said.

She teaches a diversity and design course, which is open to anyone on campus and addresses issues of social justice caused by and solved by design at all scales. She also teaches human factors, which concerns the influence of the environment on humans and vice versa.

"It is a class that makes people watching both a legitimate activity and a lot fun," she said.

Webb also investigates both human factors and diversity and design with her research.

"I am very much concerned about the knowledge and values we have as designers that lead us to make decisions directly influencing inclusion," she said. "I am invested in people — regardless of age, gender, physical or cognitive functioning, or cultural/ethnic identities. Today, these issues are growing in relevance, and our environment can place people at risk or protect them from harm."

Webb attended her first IDEC meeting in 1998, when she was a graduate student at Oklahoma State University. A year or two after arriving at the U of A, she became a paper reviewer for the annual conference, and, soon after, the U of A hosted the IDEC regional meeting. She became the southwest regional chair, created one of the annual student design competitions, and began serving on task forces and committees. She became a reviewer for the Journal of Interior Design and worked on behalf of both the journal and IDEC for nine years.

Her investment in the Journal of Interior Design is what she's best known for within IDEC.

"Working with such brilliant and committed editors, authors and publishers has taught me so much about scholarly research and has really helped to frame my own research and, most significantly, to define myself as a leader," Webb said. "Reaching a point where the journal was actually returning revenue to the organization, seeing it accessible in thousands of libraries around the world, and attracting authors from so many different countries is incredibly important for interior design as a profession and as an academic discipline. I hope that my efforts have allowed the important work of scholars to be shared around the globe. If this is to be my legacy to my profession, then I am content."

Though she doesn't seek out the spotlight, this recognition is deeply meaningful to her.

"Simply doing good work is what has been most important. However, knowing that the people that you admire most and are such incredible leaders themselves have noticed what you were doing is incredibly reassuring," she said.

Webb noted that there is a growing trend for faculty and even students to not join professional organizations and to not be active members.

"I would like to be an advocate for membership as a way of growing and connecting. Perhaps my efforts and this recognition can be encouraging to others," she said.