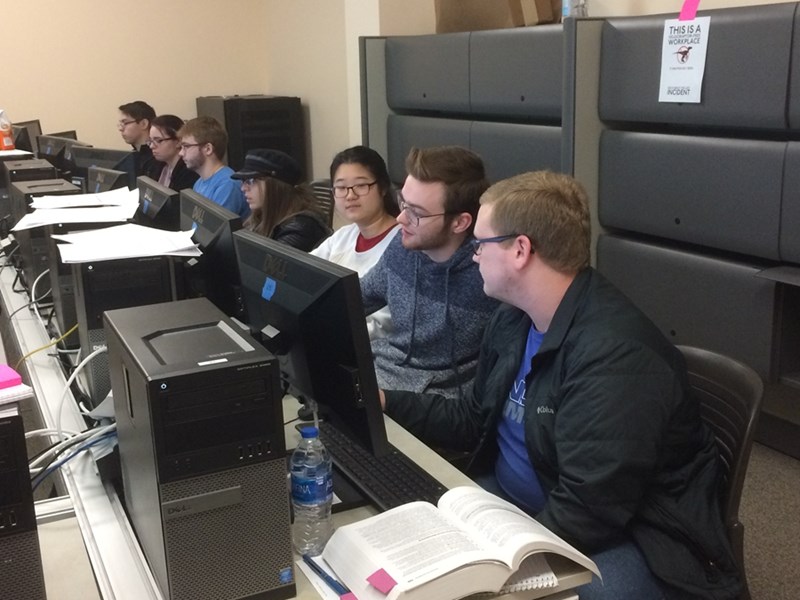 Members of the Cyber Hogs team have earned a ticket to the Southwest Regional Collegiate Cyber Defense Competition finals in Tulsa March 22-24.

A University of Arkansas student cyber-defense team will return this month to the finals of an eight-school competition to see which university will emerge victorious at the end of a real-world cybersecurity gauntlet.

The University of Arkansas Cyber Hogs made the Southwest Regional Collegiate Cyber Defense Competition finals by coming in the top eight slots in a field of 21 after a qualifying round.

The Cyber Hogs were coached by Roy Hatcher of UITS and Dale Thompson, associate professor in the Department of Computer Science and Computer Engineering.

CCDC provides hands-on application of information assurance skills to enhance students' understanding of both theory and practice. The CCDC fulfills the same role as a capstone project in a traditional engineering program, combining legal, ethical, forensics, and technical components while emphasizing a team approach in a real-world environment.

For Cyber Hogs Co-Captain Alicia Gillum, the competition is a chance to get hands-on experience in cybersecurity, a field she hopes to pursue after graduation. And, she said, working with teammates has given her important perspectives to improve her work.

"We learn from each other—each person brings a unique point of view to the table and that's especially important in cybersecurity," she said. "I've learned so much from my fellow teammates that I wouldn't have learned in class. The problem with undergraduate courses is that they're large and there are few resources to get genuine hands-on experience with, but with CyberHogs I can collaborate with others who share my passion for learning and apply the security models I've learned in lecture."

The Cyber Hogs are a cybersecurity student-led effort sponsored by the Department of Computer Science and Computer Engineering and the UITS chief information security officer.