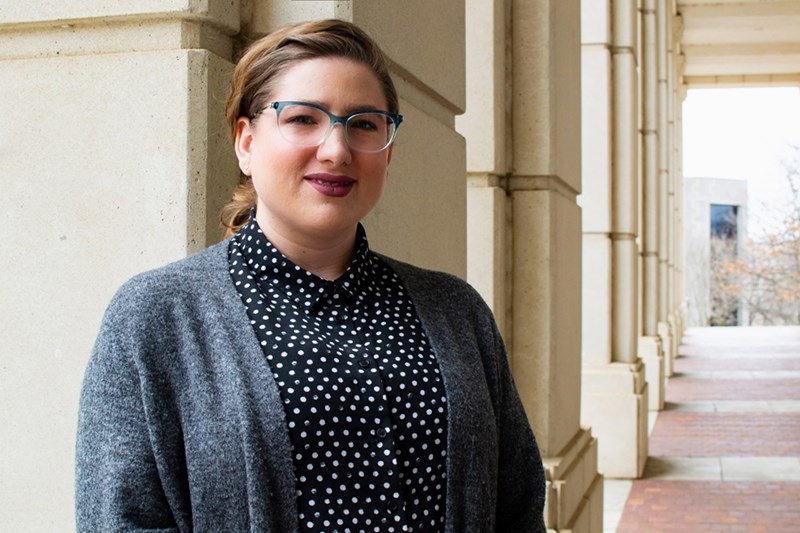 Folklorist Virginia Siegel has joined the University Libraries' staff as the new Arkansas folk arts coordinator for the Arkansas Folk and Traditional Arts, a new program funded by a grant from the National Endowment for the Arts that seeks to document, present and sustain Arkansas traditional arts.

Originally from Ohio, Siegel earned her Bachelor of Fine Arts in Historic Preservation from the Savannah College of Art and Design, which focused on the preservation of architecture. She then became an AmeriCorps service member for the Homeless and Housing Coalition of Kentucky, working with low-income homeowners to revitalize and repair their historic homes.

"We went into homes, talked with people and heard their stories," said Siegel. "I became more interested in the homeowners and their experiences than the physical architecture on its own, and how people related to an environment and made it their home."

As the Arkansas folk arts coordinator, Siegel will work with individuals and groups to promote Arkansas heritage and traditions. She will develop programming centered on Arkansas traditional arts, as well as provide training and workshops in folkloric methodology. Her focus is on what's happening right now with Arkansas' "living tradition bearers" and is inclusive of Arkansans of all walks of life.

"I really see my role as a link between tradition bearers and organizations already doing this great work throughout the state," said Siegel. "I am here to document Arkansas traditional arts and produce programming that highlights Arkansas tradition bearers, and my focus is on supporting those who are already working to sustain Arkansas folklife and culture and finding ways to partner and enhance one another. Arkansas has a rich, diverse heritage, and I'm excited to shine a light on it."

The public is welcome to contact Siegel about any Arkansas traditions or tradition bearers that should be documented and featured in programming.