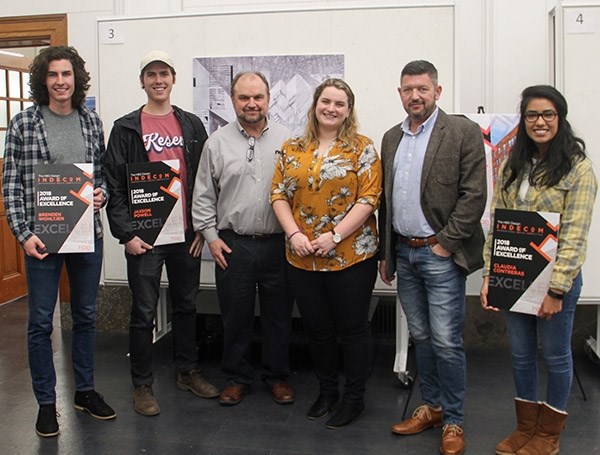 FAYETTEVILLE, Ark. – Eight students in the Fay Jones School of Architecture and Design were honored in the 11th annual HBG Design International Design Competition during an Oct. 31 awards ceremony in Vol Walker Hall on the University of Arkansas campus. The competition recognizes work students complete at international locales within the school's required study abroad programs.

This year, 11 student projects were submitted to the competition. Two groups were recognized as first-prize winners with Awards of Excellence, with each earning a $2,000 prize, and two groups were given Honorable Mentions, each earning a $500 prize. Juries from HBG Design and the Fay Jones School evaluated the projects and determined the winning work.

Brenden Wohltjen and Jaxson Powell, both fifth-year architecture students, won an Award of Excellence for their project, "Knotty Infrastructure," from the Rome studio. Wohltjen is from Mansfield, Texas, and Powell is from St. Louis, Missouri.

"The winning project for the Rome studio was inspired by and developed from an analysis of Roman infrastructure, especially street intersections," said Jeff Shannon, professor of architecture, interim architecture department head and a faculty jury member in this year's design competition. "The students leveraged this analysis into the creation, at one particular intersection, of a linked pair of public spaces, i.e., a monumental stair providing access to a river walk and a public park."

Wohltjen said their project was an urban renewal of a site located in Rome between St. Peters and Castel Sant'Angelo. They looked at infrastructure in Rome to find places where the infrastructure overlapped and tangled, or formed "knots" of infrastructure in the city. Their goal was to reconnect the unused space surrounding the site and create a coherent space among all the intersections, which they did through a sunken plaza that connected major areas of the site with a series of footpaths.

Claudia Contreras and Chase Wyatt, both fifth-year architecture students, won an Award of Excellence for their project, "Centro Urbano para Norte Americanos," from the Latin American Urban Studio in Mexico. Contreras is from Rogers, and Wyatt is from Memphis, Tennessee.

"The winning project from the Mexico studio was inspired by a recognition of the radically different contexts around the triangular site," Shannon said. "In response, the students designed each project edge as a direct and appropriate response to these differences."

Contreras said their project considered the terms "deportation" and "border," and what those mean for people and how people were impacted by this forced transition. They applied the word "transition" at multiple scales — the transition between two worlds (the United States and Mexico), between emotions, and between their site (the Veaducto and the park). They placed a barrier on the site's north side, separating the busy highway and the calm park.

"Placing the housing portion of the program within that barrier gave our residents a view to the city, creating an inhabitable border," Conteras said. "As the project developed, we focused on the Mexican community and opened our site to the park through program and materiality. Bridges complemented the plaza by proving additional community spaces as well as bringing both sides together."

Sloan Aulgur, a third-year interior design student, and Bryan Murren, a fourth-year architecture student, received an Honorable Mention for their project, "The CUNA," from the Latin American Urban Studio. Aulgur is from Russellville, and Murren is from Springfield, Missouri.

CUNA stands for Centro Urbano para Norte Americanos, or Urban Center for North Americans. The Latin American Urban Studio studio focused on creating this urban center for individuals who had grown up in the United States but were deported to Mexico.

"Having grown up in the United States but forcibly removed to Mexico, these individuals would be going through an identity crisis of sorts — to look like everyone, but not be like everyone or even speak the same language," Murren said.

Murren said their project created various spaces for these individuals to host activities, such as dining, musical lessons and sports with both their neighbors in the CUNA and those in the surrounding communities. By linking these spaces, residents are able to see and interact with each other and their surroundings as they settle into their new life in Mexico City.

David Sweere and Rachel Filgas, both fifth-year architecture students, also received an Honorable Mention for their project, "Monumento Del Tempo Romano," from the Rome studio. Sweere is from Maumelle, and Filgas is from Broken Arrow, Oklahoma.

In the Rome studio, there were six different project sites along the Via Papalis. Filgas said their project was a monument piazza and transit station that offered moments of escape from the traffic and noise of the city's center while also providing opportunities of visual connection to the surrounding monuments and activity.

"It begins to balance the line between architecture and sculpture as a public folly garden," she said.

HBG Design, the Memphis firm that helped judge the entries, awarded the $5,000 in total prize money. Mark Weaver, a partner and principal architect with HBG Design and a 1982 graduate of the Fay Jones School, coordinated the competition. Kelly Grecco, a recruiter with the firm, and Landon Shockey, a 2007 interior design graduate of the Fay Jones School, joined Weaver at the awards ceremony. The firm also provided pizza for the school's Voloween celebration, which immediately followed the awards event.

The firm established the international design competition for architecture students at the Fay Jones School in 2007. This year, the firm opened the competition to include interior design student projects that took place in both the Rome and Mexico studios.

"HBG Design has long believed that travel provides a unique perspective essential to professional and personal growth," Weaver said. "We are proud to support the emerging generation of architects and interior designers through the INDECoM program."

Fay Jones School students have participated in study abroad programs at the U of A Rome Center in Italy since 1989. The school also has conducted the Latin America Urban Studio in Mexico since 1994.