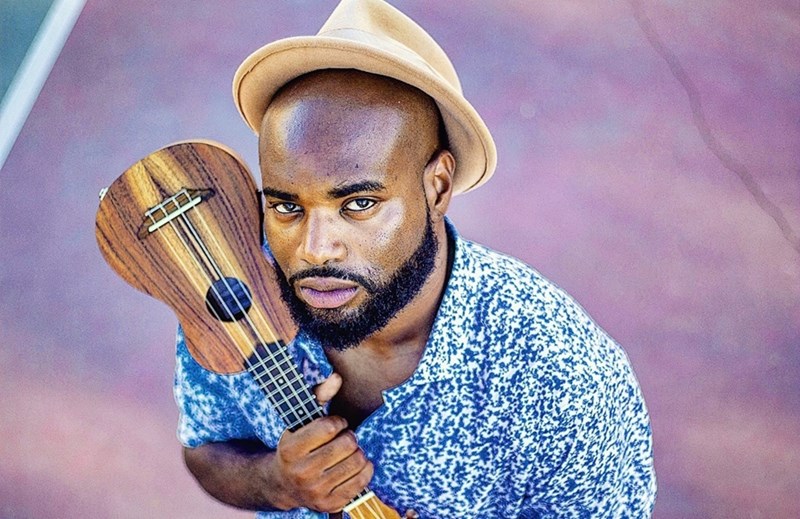 Austin Ashford packs up his ukulele and heads to New York City.

Austin Dean Ashford, a third-year student in the M.F.A. Theatre Programs in playwriting and acting, will be performing his original play (I)sland T(rap): The Epic Remixology of the Odyssey at an off-Broadway venue for one night only at 9 p.m. Friday, Oct. 12.

Ashford is currently in the Department of Theatre's production of Clybourne Park by Bruce Norris and will head to New York to present the full version of his one-person show (I)sland T(rap) after the final performance at 2 p.m. Sunday, Oct. 7. The show has already earned a variety of awards at regional festivals and has been invited to premiere at international venues and also be adapted into film. He will be traveling with Theatre M.F.A. alumnus and director, Cole Wimpee, this month to the ninth annual United Solo Theatre Festival, held from Sept. 13 to Nov. 18 at in the Studio Theatre at Theatre Row on 410 West 42nd Street, New York City.

The United Solo Theatre Festival is an annual international festival for solo performances. Through a variety of one-person shows, the festival explores and celebrates the uniqueness of the individual writers, performers, and their story-telling methods. Ashford said he is "honored to be a part of the Solo Festival this year, because it will be my first time visiting New York ever, and I get the privilege of performing instead of just watching. I'll definitely be going to as many other shows that my time and budget allows though!"

He is very appreciative of the community support he has received and hopes to make each of his advocates proud.

(I)sland T(rap) is a hip-hop riff about Black Ulysses on an Odyssey of self-discovery and a powerful exploration of a young artist of color navigating the turbulent waters of contemporary American culture while trying to find his authentic voice. (I)sland T(rap) has lyrical poetry, live music, and commentary on Black experience in America, this tour-de-force charts a soul journey on an exotic island where Black Ulysses discovers his place in a society full of gun violence and oppression. Recently recognized by the Kennedy Center for Original Hip-Hop Script, this narrative dives into overcoming isolation through fantasy, myth and escape.

The Department of Theatre is very proud of Austin, and looks forward to supporting him in his future accomplishments, both with (I)sland T(rap) and other projects.

The University of Arkansas Department of Theatre is a part of the J. William Fulbright College of Arts and Sciences. They combine a first-rate theatrical education full of hands-on experience with a wide selection of titles to challenge students and delight the community. The department offers the Bachelor of Arts degree in Theatre, a broad spectrum program in the context of a liberal arts education, and the Master of Fine Arts degree in six concentrations: Acting, Directing, Playwriting, Costume Design, Scene Design and Lighting Design. Classes at both undergraduate and graduate levels are focused on providing a strong, professional orientation to theatre performance and technology in conjunction with appropriate research-based coursework to address the required foundations in theatre history, dramatic literature and dramatic criticism.