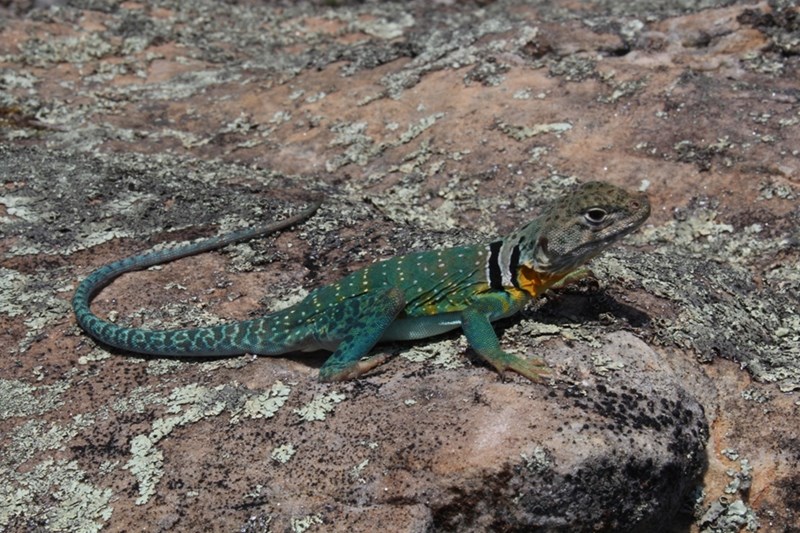 The eastern collared lizard is a threatened species in Arkansas.

FAYETTEVILLE, Ark. – Eastern collared lizards, once plentiful in the Ozark Mountains, are now listed as a “species of greatest conservation need.” What does their decline say about habitat degradation in the Ozarks?

That’s the question University of Arkansas researcher Casey Brewster worked to answer in a recent paper published in the Journal of Herpetology. Brewster, a doctoral candidate in biology, worked with Steven Beaupre, associate dean of social sciences, and J.D. Willson, associate professor of biology, to link decades of fire suppression to changes in Ozark habitat detrimental to the lizards.

“We know glade habitats have declined substantially over the last 100 years from fire suppression,” Brewster said. “We also know the collared lizard population is declining in Arkansas. Common sense tells you they are related, but if you really want to know how, you have to work out the mechanisms.”

Glade habitat, increasingly rare in the Ozarks, is open and sunny, characterized by grasses, herbaceous plants and wildflowers. Containing wild fires, instead of letting them burn, allows trees and other woody vegetation to encroach on the glade habitat, resulting in more shade and cooler temperatures. Lizards, being cold-blooded, need the sunlight to become active.

“More shade equals lower temperatures and less surface activity for the lizards,” Brewster said. “They spend less time at a body temperature at which they can digest food.”

The findings link environmental changes to the animals that depend on the areas, and have implications for how glade habitats should be managed for conservation.