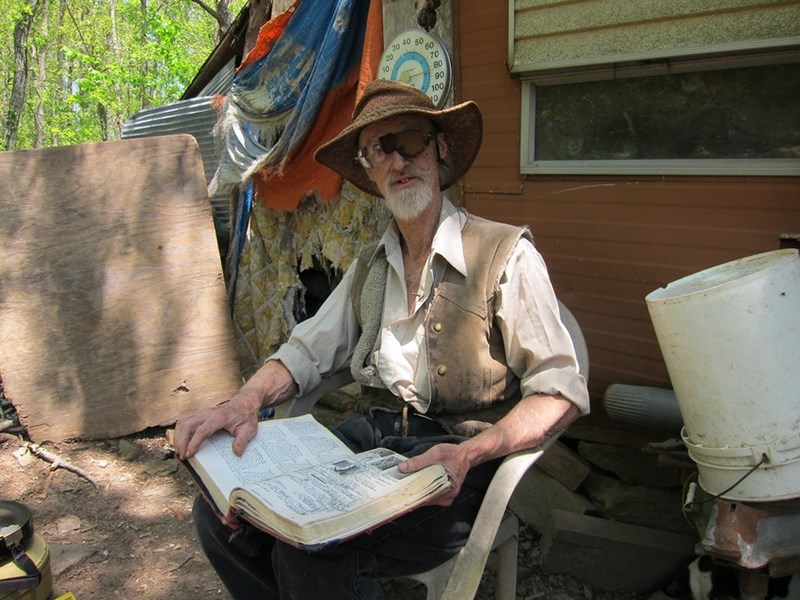 FAYETTEVILLE, Ark. – Kent Bonar will appear at three events for this year’s Fayetteville Roots Festival, which runs from Aug. 22-26. Bonar’s events are rare opportunities for the public to meet and learn from one of the foremost experts on the flora of Arkansas, so dedicated to his pursuits that he has been called the “John Muir of the Ozarks.”

Jerrmy Gawthrop, co-founder of the Fayetteville Roots Festival, said, “I’ve been hearing about ‘this man in the woods’ for years, and we are so excited to have him. Our food and music festival is dedicated to showcasing what makes this region of the Ozarks unique, and this person, the way he lives, the way people feel about him, and the nature he knows so much about, are a wonderful example of this uniqueness.”

Bonar lives alone — with his menagerie of dogs and cats — in the Newton County woods, shunning the conveniences and comforts most people consider essential. His home, which he refers to casually as a “hovel,” has neither electricity nor internet, and he doesn’t drive or own a car. He can be contacted through a phone arrangement with the Newton County Nature Society, which works – if the caller allows a few days to catch up with Kent.

Years ago, Bonar began drawing the plants he encountered in the woods alongside their descriptions in his copy of Edwin Smith’s Atlas and Annotated List of the Vascular Plants of Arkansas. Eventually, over 3,500 illustrations occupied the margins of Smith’s atlas. When Bonar’s weathered copy was discovered by a group of nature lovers, who were awed by the intricate beauty of Bonar’s additions, a campaign began to preserve the work. Bonar’s worn copy of Smith’s atlas was placed with the Special Collections department at the U of A, where it was expertly bound and scanned, and An Arkansas Florilegium, a reproduction of the pages of Bonar’s illustrated copy of Smith’s atlas, was published last December by the UA Press.

Bonar continues to devote his time to studying the natural world surrounding him and advocating for causes he believes in. Since his book’s publication, Northwest Arkansas’ most beloved recluse has been coaxed out of the woods for a scattering of events in Jasper, Fayetteville and Eureka Springs. The events attracted standing-room only crowds, with long lines of people buying books two and three at a time. A second printing of the book occurred within weeks of its release.

For more information on An Arkansas Florilegium or the Fayetteville Roots Festival, visit www.uapress.com.

About the Roots Festival: Fayetteville Roots Festival is a five-day music and food festival taking place Aug. 22-26 in Northwest Arkansas. The festival features over 10 music stages and multiple culinary stages and events, with nationally known acts paired with undiscovered regional and local talent.