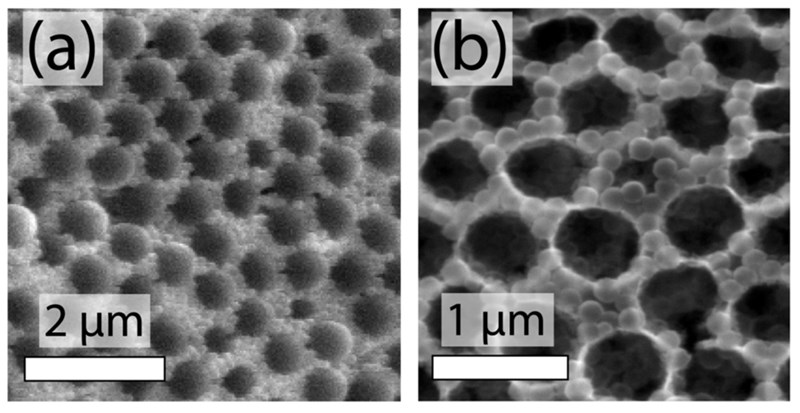 Researchers covered glass and polymer nanospheres with a thin layer of zinc oxide (left). After the polymer spheres were dissolved (right), they had a material that could act as a photoanode.

FAYETTEVILLE, Ark. – A team of chemistry and chemical engineering researchers at the University of Arkansas has developed a method of creating materials for artificial photosynthesis that is more efficient and cost-effective than current methods.

Plants use photosynthesis to convert sunlight into chemical energy, which they store in the form of sugars or fatty acids. A device known as an artificial leaf mimics this natural process, providing a reliable, economical and sustainable source of storable chemical fuels, such as hydrogen.

Artificial photosynthesis has an advantage over traditional photovoltaics, which produce electricity only when the sun is shining.  An artificial leaf stores the energy from sunlight as chemical bonds which can be used to generate power at any time, matching the advantage of that coal and natural gas have over photovoltaics.

Currently, materials for artificial photosynthesis devices are expensive to produce because they must integrate all of the components that carry out the necessary light absorption, chemical catalysis, and other processes, and each of these components must be assembled on the nanoscale.

“Typical nanostructured materials for these applications use the same expensive and energy-consuming fabrication methods that are used to build microprocessors,” explained Robert Coridan, assistant professor of chemistry and biochemistry. Coridan worked with Mya Norman, an instructor in chemistry and biochemistry; Walker Perez, who recently earned a bachelor’s degree in chemical engineering; and Chandler Kline, an undergraduate chemical engineering student.

This research team used a method called atomic layer deposition to build nanostructures one atomic layer at a time. They deposited layers of zinc oxide onto a mixture of glass and polymer nanospheres. Once the structure was complete, the researchers could dissolve the polymer, leaving a network of zinc oxide-coated glass spheres and hollow pores. This structure contains all the elements necessary to act as a photoanode, the part of an artificial leaf that uses light to turn water into oxygen and energy.

Coridan explained that a similar process could be used to create a photocathode, the part of an artificial leaf that takes the protons and electrons created by the photoanode and recombines them to form hydrogen, which can be stored and used as fuel.

The researchers tested their patent-pending material by using a device called a potentiostat to measure the amount of energy it generated in the form of current.

Their results are available through open access in the journal Advanced Functional Materials.