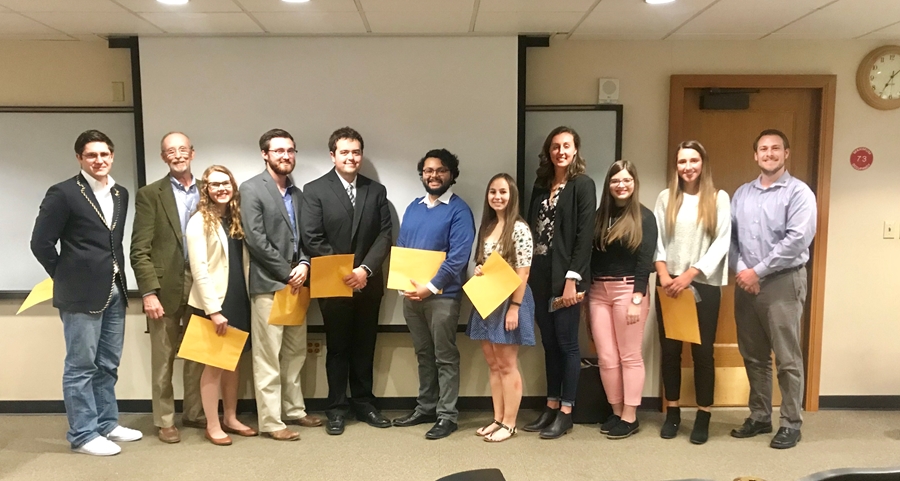 The 2018 inductees of Delta Phi Alpha, with adviser Brett Sterling.

The University of Arkansas' chapter of Delta Phi Alpha German National Honor Society held its annual induction ceremony on March 14. This year, the university inducted 13 students who have demonstrated excellence in learning the German language, as well as dedication to the further study of German language and culture.

The keynote speech was delivered by Ervin Malakaj, chair of the German program at Sam Houston State University in Huntsville, Texas. In his address titled "Audre Lorde's Germany," Malakaj spoke about the role played by African-American poet and theorist Audre Lorde in catalyzing the movement for black identity in 1980s Berlin. Malakaj's fascinating talk on a largely overlooked aspect of transatlantic history was sponsored by the Department of World Languages, Literatures and Cultures, the African and African-American Studies program, the Gender Studies program, the International Studies program, the Honors College, and the Center for Multicultural and Diversity Education.

Delta Phi Alpha is an esteemed organization that provides networking and scholarship opportunities to students interested in German, while pursuing a larger mission to emphasize those aspects of German life and culture which are of universal value and which contribute to humanity's eternal search for peace and truth.