Zombies Are Real, and Closer Than You Think 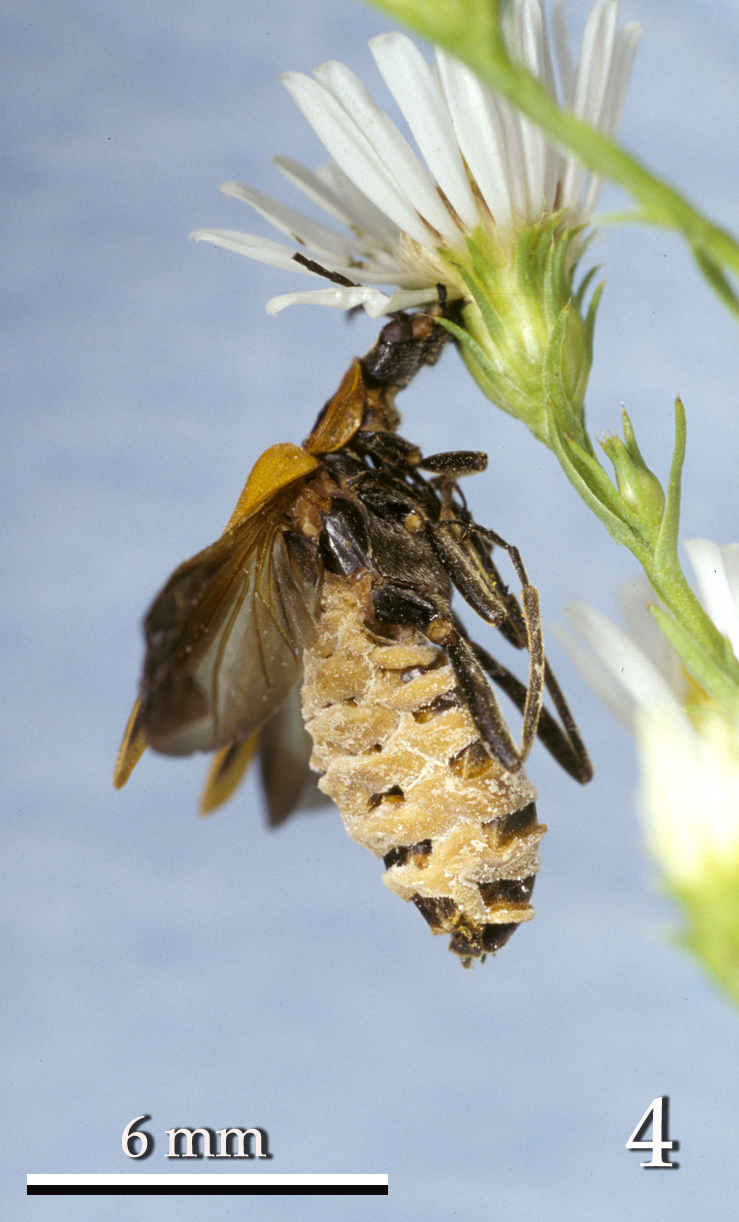 A goldenrod soldier beetle remains secured to a flower by its teeth after dying of a fungal disease that turns the insect into a zombie before killing it.

FAYETTEVILLE, Ark. — Tonight, as you watch The Walking Dead, consider the possibility that zombies are real and may be in your yard right now.

No kidding, you should go look. I'll wait.

If you didn't see them, you likely were looking too big. The zombies in question are beetles. You can call them "zombeetles" if you like. Don Steinkraus won't mind.

Steinkraus, professor of entomology for the University of Arkansas System Division of Agriculture, has been studying the interaction of Eryniopsis lampyridarum, a fungal pathogen, and goldenrod soldier beetles for decades.

Earlier this year, Steinkraus published a paper about his research in the Journal of Invertebrate Pathology, the leading scientific journal on diseases of all invertebrates, including beetles.

Zombies in the Yard

E. lampyridarum is an entomopathogen, a class of organism that alters the behavior and morphology of its hosts. Steinkraus said there are many such pathogens and parasites, some of which infect larger animals, including mammals — including humans.

"It's eerie," Steinkraus said. "I'm a scientist, I'm a biologist. But as I get older, you know, I think about how all these things are preying on humans, too."

Makes you want to take a closer look at your neighbors, doesn't it?

In his paper, Steinkraus cites Toxoplasma gondii, a common pathogen of cats, as an example of an entomopathogen. This bug can only reproduce sexually inside cats. In order to get into cats, it infects mice and rats and changes their behavior.

This disease can make people sick, too. But let's just focus on the cats and rats.

The rodents usually avoid cats, even steering clear of areas where they smell cat urine. After being infected with T. gondii, they lose their fear of cats, ignore signs of feline presence and even stand still instead of running for cover when a cat comes after them. The cats do what cats do with rodents and become infected. The cat claims its prize and T. gondii checks into the pathogen honeymoon suite.

The rest is pure biology.

Goldenrod soldier beetles are common in Arkansas, Steinkraus said. They feed on the pollen of flowering frost aster, common boneset and Canada goldenrod. The beetles produce one brood each mating season and are known to use flowers as leks — gathering places where males display behavior aimed at attracting mates.

This is where E. lampyridarum plants its zombie curse.

The pathogen causes an infected beetle to land on a flower and latch on tightly with its mandibles. The insect then dies, firmly locked onto the flower by its jaws.

Steinkraus said latching onto flowers with their mouths is not typical behavior for healthy soldier beetles. Normally, they cling to the plants with their feet. After dying from this fungal infection, however, the beetles remain anchored to the flowers only by their mandibles. Neither their legs nor fungal rhizoids are involved in the attachment.

Assigning purpose to this action becomes tricky, scientifically speaking. It's like assigning motive to the guy who cuts through your yard. Maybe he's late for work. Maybe he likes to peek in your windows. Or maybe he's trying to avoid the zombies in the street.

Zombie behavior in goldenrod soldier beetles has been observed at least since the 19th century. Steinkraus began his research on a foundation of observations going back to American mycologist Roland Thaxter's work in 1888.

Steinkraus collected hundreds of goldenrod soldier beetles from test plots of frost aster, including many infected or killed by fungus. The insects were placed in plastic cups — mating pairs were contained together — and the dead were counted daily.

Sex of the beetles was determined after death and tissue samples were examined under a microscope to look for spores or fungal structures.

Continuing observations over the years revealed what was happening, if not why.

Roughly 12 to 22 hours after death, the zombeetle opens its wing covers and spreads its wings. Somehow, Steinkraus said, the fungus is acting upon the wing muscles — which more closely resemble origami than, say, biceps — and making them move even though the beetle is dead.

"It's kind of like you're sitting in the morgue in the early hours before sunrise, and all of a sudden all the bodies sit up," Steinkraus said.

The insect's posture begins to change dramatically as fungal tissue growth swells its abdomen. More than 24 hours after death — usually on the night of the following day — spores erupt through the membranes separating the abdominal segments.

If you're keeping up, you understand now that the night of the living dead is the second night.

The spores do not explode out of the beetles, Steinkraus said. In observations, including under stereomicroscopes, the spores are not found on the opened wings or on collection plates in the laboratory. The spores remain on the abdomen and appear to transfer to other beetles through passive contact.

You have to touch the zombeetle to become a zombeetle.

The Why of the Walking Dead

Steinkraus observed many instances of live beetles having sex with dead beetles killed by the E. lampyridarum fungus. This kinky action suggests a purpose for the lock-jawed behavior.

In order to reproduce, Steinkraus said, a pathogen has to make contact with as many hosts as possible. As many goldenrod soldier beetles gather in their flowery leks, living beetles come in contact with the zombeetles and even attempt to mate with them.

In this manner, the deadly fungal spores find their way into an abundance of hosts.

If the dead beetles did not latch onto the flower before dying, they likely would fall to the ground where the living beetles would ignore them.

Steinkraus said many questions remain unanswered about this interaction of host and pathogen. Chief among those is, how does E. lampyridarum take control of the beetles' behavior, compelling them to land on and attach their jaws to the flowers?

Maybe the mystery is greater than the answer. If we know how to make zombies, we might learn how to not make them.

A whole genre of TV and movie franchises would be ruined.