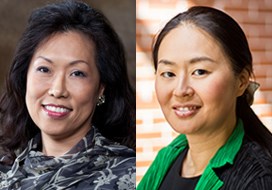 Moon-Sook Park, an assistant professor in the Department of Music at the J. William Fulbright College of Arts and Sciences, has just co-authored an exciting new, two-volume work on Korean Art Song. This publication is the first of its kind published in the United States. Park co-wrote the book with her former student, You-Seong Kim, who is associate professor and voice area chair at North Park University in Chicago.

Park and Kim partnered in the project for the shared work and dedication to the art song traditions in Korea. Park and Kim, both originally from Korea, are both acclaimed sopranos and noted pedagogues in vocal studies. Their book, Korean Art Songs: An Anthology and Guide for Performance and Study, comes in two volumes.

Volume 1 includes two articles on the Korean art song tradition: "The Birth and the History of Korean Arts Song" by Kyung Chan Min (translated by Park and Kim) and "Lyric Song and the Birth of the Korean Nation" by Kathy Brous. The volume includes a valuable resource on Korean lyric diction not previously available. Volume 1 features eight songs with text, translation, International Phonetic Alphabet transcriptions, and scores in the original keys. Volume 2 features 11 more songs including the well-known Korean folk-tune, "Ari Arirang," set in the art song tradition.

The authors note in the preface that the vast majority of Korean art song tradition are composition based on the Western music tradition. These songs are written in a variety of compositional styles that demonstrate the highest level of artistry. They note that, "the biggest barrier for the non-Koreans to access the Korean art song literature would be the language."

This two-volume work is published to help any classical singer better access this growing literature. The anthology assists singers with word-for-word translations, Romanized texts, poetic translations, IPA transcriptions, as well as the background information on composers, poets, and songs included. The two articles included inform the reader on the history of the tradition and provides insight into the development of the style in Korea. The authors hope that the 2 volumes can serve to open up this repertoire to a new generation of musicians.

Moon-Sook Park, a native of Korea, began her professional career in Europe with countless performances as a soloist to her credit. She has presented numerous solo concerts, chamber music, and operatic works in the U.S., Germany, Italy, France, Switzerland, Austria, Slovakia, and Korea, in addition to various performances of avant-garde music. She was also a stipend recipient of K.A.A.D. in Germany and won the coveted Bayreuth Stipend Award for extraordinary young artists.

Park joined the faculty of the University of Arkansas in 2012. Park holds a D.M.A in Voice Performance and Vocal Pedagogy from the University of Cincinnati College-Conservatory of Music and graduate degrees from Freiburg, Saarbrücken, and Stuttgart music conservatories in Germany; as well as a private diploma from the Academia di Canto F. Cavalli of Milan, Italy; and a B.M. from Seoul National University, Korea. Since Park's U.S. début solo recital at Carnegie Hall in 2001, she has found her second home in the U.S. and her reputation as a performer and scholar has been acknowledged nationally and internationally in recitals, lecture recitals, solo concerts, chamber music, operatic works, avant-garde music, master classes, and paper presentations.

You-Seong Kim is an associate professor of music and head of the voice area at North Park University in Chicago. Before she joined the faculty of North Park University, Kim taught as a full time voice faculty member at Ohio University. Kim, a soprano, has performed in operas, concerts, and recitals throughout the United States, Canada, Austria, Germany, Portugal, Belgium, and her native Korea. She has appeared with Florentine Opera, Cincinnati Opera, Bloomington Early Music Festival, Korean National Opera Studio, University of Cincinnati Opera, Indiana University Opera Theatre, WDR- Rundfunkorchester Köln, and the Kentucky Symphony. She holds bachelor's and master's degrees in voice from the Seoul National University, and the D.M.A. degree in voice from the College-Conservatory of Music at the University of Cincinnati.