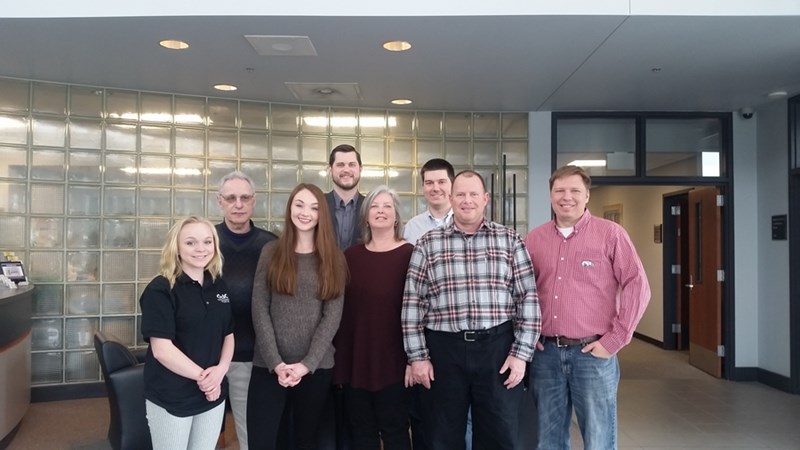 The Ozark Integrated Circuits team at the Arkansas Research and Technology Park.

FAYETTEVILLE, Ark. – Ozark Integrated Circuits Inc., a technology firm located in the Arkansas Research and Technology Park at the University of Arkansas, has received a $750,000 award from the U.S. Air Force. The grant is to develop electronics packaging and assembly systems for controls in jet engines. The controls can operate at temperatures up to 300 degrees Celsius.

The Fayetteville-based company will continue collaborating with researchers at the University of Arkansas’ High Density Electronics Center, or HiDEC, also located at the technology park. U of A researchers involved in the project are Simon Ang, HiDEC director and professor of electrical engineering; and Silke Spiesshoefer, clinical assistant professor of electrical engineering.

“We are very excited about this award,” said Matt Francis, CEO of Ozark Integrated Circuits. “It builds on our long-term relationship with the U of A and enables us to build the missing link for the high-temperature chips we’re developing.”

With previous support from the Air Force, the researchers built a ceramic-based wiring board that can operate in conditions up to 300 degrees Celsius. In the next phase, the researchers will begin printing the ceramic boards, to reduce cost, and integrate each one into a smart sensing node. Smart sensing nodes are important modules for the electronic control of jet engines. These nodes consist of analog, mixed-signal, digital and power-electronics blocks.

The second phase includes building and testing system prototypes that can withstand extreme conditions. The researchers will also convert analog systems to digital, increase processing capabilities and introduce an industry-standard communications link. The second phase includes a feasibility study to prepare the module for the next phase of development.

When finished, the new module will be more reliable and cost significantly less to build than current sensing nodes.

Ozark Integrated Circuits has also received two additional awards from the U.S. Department of Energy totaling slightly less than $310,000. These awards will allow the company to continue its work developing scalable ultraviolet detectors and high-temperature electronics for geothermal wells.

The total of $1 million in federal funding will allow the company to expand its offices and facilities at the Arkansas Research and Technology Park.

About Ozark IC: Ozark Integrated Circuits Inc. is a fabless semiconductor company spun out of research by Alan Mantooth, Distinguished Professor at the U of A, and is headquartered at the Arkansas Research and Technology Park. Its expertise consists of design of analog and mixed-signal integrated circuits for extreme environments – high and low temperatures.