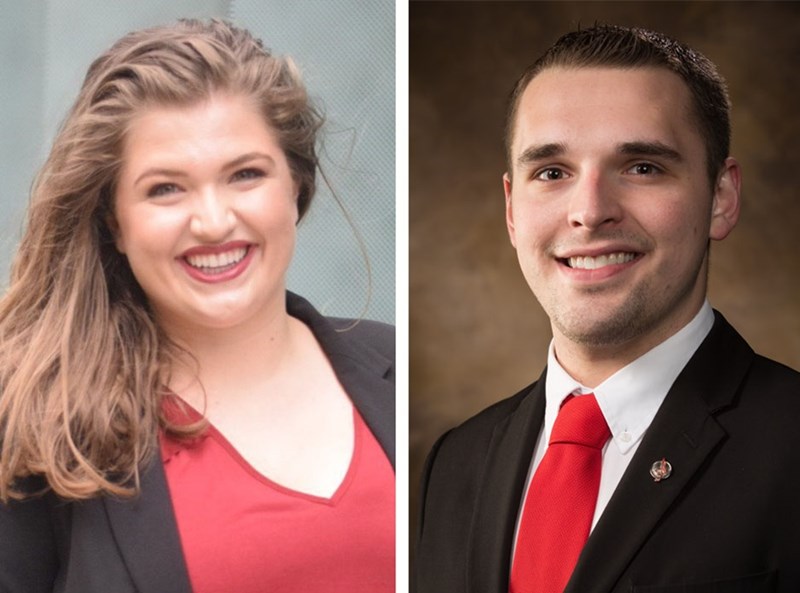 FAYETTEVILLE, Ark. – University of Arkansas students Ryann Alonso of Tulsa, Oklahoma, and Sam Harris of Damascus were recently named finalists for the 2016 Harry S. Truman Scholarship. Alonso, a junior, is an honors political science and communications major in the J. William Fulbright College of Arts and Sciences. Harris is a senior honors agricultural business pre-law and agricultural communications major in the Dale Bumpers College of Agricultural, Food and Life Sciences.

Their selection places Alonso and Harris among the top students in the country.  Truman Scholars are selected based on a commitment to public service and are awarded $30,000 in scholarship funds to attend graduate or law schools. The applications process is rigorous and often requires more than 50 hours to complete.  Candidates must also interview.  Universities and colleges can submit up to four applications each year.

“Ryann Alonso and Sam Harris are energetic students and service-minded individuals,” said Jim Coleman, provost and executive vice chancellor for academic affairs. “Just reading their extensive resumes can be exhausting. It is not surprising that the Harry S. Truman Foundation, which is looking for future ‘change agents,’ selected them as finalists for this award. The competition is fierce at every level. The University of Arkansas is very proud of what they have accomplished and what we know they will do for their communities throughout their public service careers. We wish them well in this competition and in the future.”

Alonso is a Silas Hunt Distinguished Scholar and was named a National Forensics League All-American Debater. She is a member of the U of A Associated Student Government, the Razorback Action Group, is the chapter president of University of Arkansas Young Democrats and chief of staff for Young Democrats of Arkansas. Alonso has also volunteered on multiple local and statewide political campaigns.

Alonso’s interest in politics has led her to push for greater voting access for University of Arkansas students. In 2015, she spearheaded a student-led initiative to create a voting center on campus. While the initiative was voted down by the Washington County Election Commission, Alonso was able to register hundreds of students to vote. In addition to leading an independent initiative to increase voting access for students, Alonso was an integral part of the campaign to help elect the first Latino Democrat to statewide office in Arkansas this past fall, where she served as the campaign’s intern program leader.

Upon graduation, Alonso intends to study for a Juris Doctor degree with a concentration in constitutional law. She plans to continue her work to improve access to polling stations and increase voter participation by “addressing accessibility to voting and further regulating campaign spending.” While in law school, Alonso plans to work for the Equal Justice Initiative, which performs legal work for low-income areas in the rural south. Following her studies, she hopes to push for reform in the criminal justice system, and eventually run for office in the Arkansas House of Representatives.

Harris is a University of Arkansas Honors College Pilot Research Scholar. In 2015, he earned the World Food Prize Foundation’s Elaine Szymoniak Top Research Award for his study on how to improve agricultural practices and minimize food insecurity in remote villages in India. He also received an American FFA Degree, for outstanding work with the organization. He also was named a Prudential Spirit of the Community Honoree and was awarded a Presidential Community Service Award. Harris has been involved with the Associated Student Government, the Student Alumni Board, the Bumpers College Honors Student Board, and Young Democrats. This past year, Harris was a Risk Management Agency intern and a Wallace-Carver Fellow for the U.S. Department of Agriculture. He has also volunteered on several local, statewide, and national political campaigns.

Harris’s work to alleviate food insecurity has taken him across the globe. In 2016, Harris traveled to Ho An, Vietnam, with a group of U of A students, where he spearheaded the instillation of bio-digester systems, an eco-friendly tool that can convert animal waste to fuel for heating and cooking. Encouraged by the initiative, Harris is currently planning a pilot research exchange program in 2017 to implement similar technology in rural communities in Belize. Closer to home, Harris has worked to foster increased political engagement in Washington County. In 2016, he organized the largest voter registration drive in the county’s history. His efforts led to a 20 percent increase in voter registration from the previous national election.

Upon graduation, Harris intends to study for a Juris Doctor and a Master of Laws, and he ultimately hopes to work toward alleviating food insecurity on a global scale. Following his studies, Harris would like to work in the U.S. Agency for International Development’s Bureau for Food Security, where he hopes “to address the disconnect between cultural sensitivity and the implementation of innovative agricultural technologies.”

University of Arkansas students who are interested in applying for the Truman Scholarship should contact the office of nationally competitive awards at awards@uark.edu or 479-575-3771.