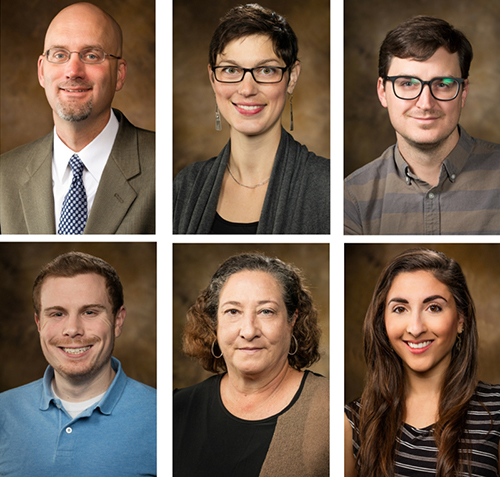 The Arkansas Teacher Corps, a University of Arkansas program, recently completed a cycle of new hires in key positions as the program expands its presence across Arkansas, particularly in the Delta. The program is in its fifth year of recruiting and training new teachers to work in economically disadvantaged schools in the state.

The program was guided in its first five years by Executive Director Benton Brown and Faculty Director Gary Ritter. When Brown took a position last summer as head of teacher education at Bath Spa University in England, Ritter and the rest of the team worked to hire the program's second executive director.

Shelley Aschliman joined the Arkansas Teacher Corps as executive director in September. Aschliman is a former English teacher and served in a variety of leadership roles within the field of education before joining ATC. Among other teacher leadership roles, she has served as a mentor teacher in the Stanford University teacher education program and created curricula for the Literacy Design Collaborative, an initiative of the Bill and Melinda Gates Foundation. Aschliman earned her Master of Arts in education from Stanford in 2010.

"I am excited to be working in tangible ways to advance educational equity for kids across Arkansas while also supporting novice teachers in the classroom," Aschliman said. "Helping underserved areas of the state access quality teachers — and helping those teachers thrive — is both challenging and deeply compelling work."

"After more than five years of designing and building the ATC with Benton Brown under the guidance of (former) Dean Tom Smith, I was certain that finding a talented and committed leader to move ATC forward was of critical importance," Ritter said. "I am thrilled that we were able to hire Shelley. her values are perfectly aligned with ATC's values and her leadership skills are superb."

John Hall, who previously served as a classroom teacher and project coordinator with ATC, has accepted a new position as the director of recruitment, where he will manage the organization's outreach, placement and licensure efforts. Recent outreach efforts to potential Fellows have included visits to every university campus in Arkansas and have expanded into neighboring states.

As the number of teachers serving with Arkansas Teacher Corps continues to increase, the organization has also added a teacher development manager, Jean Hammack, to the team. Hammack earned her Master of Education degree in higher education from the University of Arkansas this fall and brings over 20 years of teaching experience from pre-kindergarten to grade 12 to her work in coaching teachers.

Brandon Lucius joined ATC last summer as teacher development director, and he will design and oversee professional development for Fellows during the course of their three-year commitment. Lucius was previously a science teacher and instructional coach for science in the Arkansas Delta. He holds a Master of Education degree in educational leadership from Arkansas Tech University.

These employees join Sarah Baver, director of coaching, who has been with the organization since 2014, and Ritter, who founded the Arkansas Teacher Corps in 2012 and has been faculty director since that time.

The Arkansas Teacher Corps is driven by its mission to "recruit, train, and support exceptional, social justice-oriented individuals to serve as teachers for Arkansas students who need them the most." Applicants selected as ATC Fellows must pass all required educator licensure tests and participate in ongoing professional development and coaching throughout their Fellowship. They are paid a first-year teacher's salary by their districts and receive a $15,000 honorarium from ATC in recognition of their commitment to Arkansas' students.

The program is now accepting Fellowship applications for the 2017-2018 academic year. The next application deadline is Jan. 3, and applications will continue to be accepted through March 5.