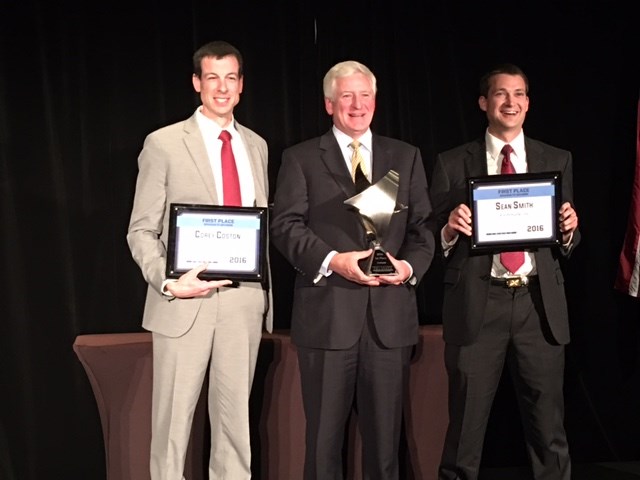 VivImmune, a start-up biotechnology company that specializes in immunotherapy for bladder cancer, won the graduate division and a $30,000 cash prize. VivImmune, which grew out of U of A biomedical engineering research, also won $2,000 for winning the graduate division elevator pitch competition. VivImmune won a total of $83,700 this spring at graduate business plan competitions.

The VivImmune team includes Corey Coston and Andrew McKinnon, executive M.B.A. students in the Sam M. Walton College of Business, and Sean Smith, a doctoral student of biomedical engineering in the College of Engineering.

Actio Systems, which developed a patient reminder and intelligent rescheduling smartphone app for medical clinics and their patients, placed second and won $20,000. Actio Systems won a total of $40,000 this spring at graduate business plan competitions.

The top two finishes for the U of A teams brought a total of $7,000 for team advisers Carol Reeves and Cynthia Sides.

VivImmune and Actio Systems formed last fall in the New Venture Development graduate course taught by Reeves, associate vice provost for entrepreneurship at the U of A and holder of the Cecil and Gwendolyn Cupp Applied Professorship in Entrepreneurship in the Sam M. Walton College of Business.

Under the guidance of Reeves, U of A’s competitive graduate student teams have won $2.5 million in cash at state, regional, national and international business plan competitions since 2002.

This is the fifth time that a team from the U of A won the graduate division at the Tri-State competition. Previous winners were MerchantEyes LLC (2008), Tears of Life (2009), InnerVision LLC (2010) and Kordate Solutions Inc. (2015).