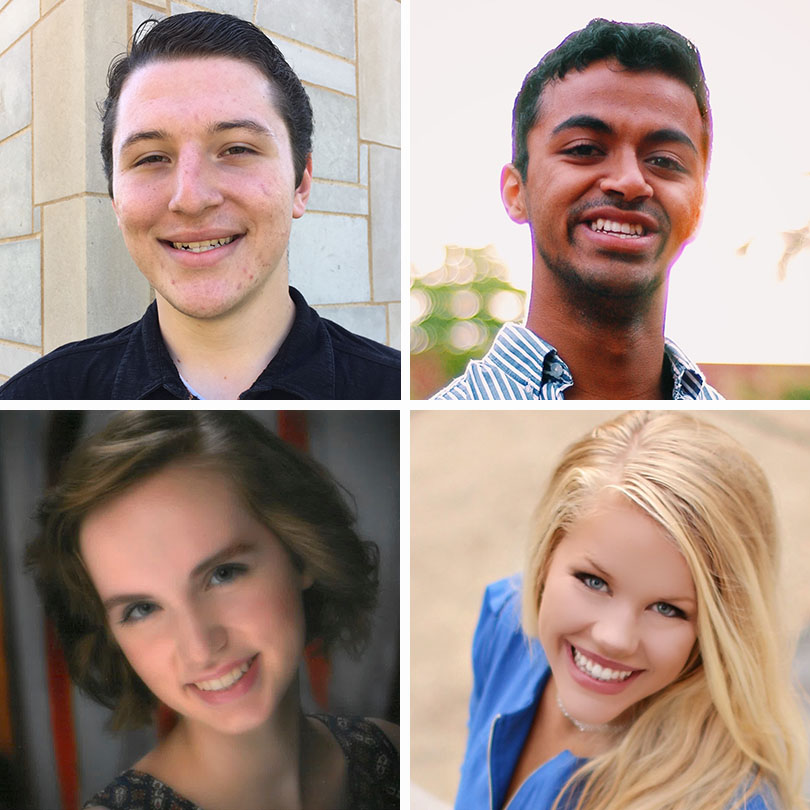 “It’s always exciting to meet the latest addition to our impressive ranks of Sturgis Fellows,” said Todd Shields, dean of Fulbright College. “I have no doubt that these students will continue the fine example of those who have been carrying the Sturgis banner for almost three decades.”

The Sturgis Fellowship, the University of Arkansas’ oldest fellowship program and among its most prestigious, offers a unique opportunity for Fulbright College’s most gifted and hard-working students. Previous awardees have been recognized at the state and national level for their academic achievement and community service.

“We are grateful for continual support of the Roy and Christine Sturgis Charitable and Educational Trust,” said Sidney Burris, director of the Fulbright College Honors Program and chair of the Sturgis Fellows selection committee. “The Sturgis gift makes it possible for these fine students to focus on their academic careers and continue the Fulbright legacy of peace through education by exploring new ideas and participating in international travel and study.”

The Sturgis Trust awards each fellow $17,500 per year for four years. The award covers tuition, room and board and provides support for educational tools such as computer hardware and software, high-quality musical instruments, professional journals and participation at academic conferences. Sturgis Fellows must pursue a major within Fulbright College, complete an intensive academic program, study internationally and graduate with honors.

Alvaro Aldana Jr. is a graduate of Rogers High School, where he was captain of the Quiz Bowl team, played in the Rogers High School Philharmonic Orchestra and was selected for All-Region Orchestra. He is a National Merit Scholar and a National AP Scholar. His service activities include tutoring calculus and Spanish. Aldana plans to major in chemistry. His parents are Alvaro and Michelle Aldana.

Reagan Broach graduated from Little Rock Christian Academy, where she was varsity cheer captain and active in student government, serving as Student Council executive treasurer, class secretary and class vice president. She is an AP Scholar with Distinction and Governors Distinguished Scholar. Her service activities include work as a counselor at Camp Aldersgate, a coach for youth cheerleading programs and a volunteer for Easter Seals. Broach plans to major in psychology. Her parents are Keith and Terry Rice Broach.

Dhruba Dasgupta graduated from Central High School in Little Rock, where he was an active competitor in physics and energy and transportation-focused initiatives. He has won top awards in many science challenges such as the Arkansas State Science Fair, Central High School Science Fair, Junior Academy of Science, Junior Science and Humanities Symposium and Arkansas Energy Office of the Arkansas Economic Development Commission. Dasgupta plans to major in biochemistry. His parents are Tonmory and Shreeparna Dasgupta.

Madison Lester graduated from Russellville High School, where she founded the Women’s Leadership Organization, a club to promote gender equality and encourage young women to be leaders in their communities. She was a member of the National Honors Society, Interact Club, newspaper staff and Young Democrats, and she served as a representative for the Young Democrats of Arkansas Women’s Caucus. She is a National Merit Scholar and received the Shondrell Green Outstanding Senior Award and the Rotary Scholar Award for Mathematics. Lester plans to major in English. Her parents are David and Carla Lester.

About the Fellowship: The Sturgis Fellowship in the J. William Fulbright College of Arts and Sciences was established at the University of Arkansas in 1985 through the generous philanthropy of Dallas-based Roy and Christine Sturgis Charitable and Educational Trust with an endowment of $2 million. The program’s success led to additional gifts in 1992 and 1998, bringing the total program endowment to $10 million. With only 20-30 Sturgis Fellows on campus at any given time, each receives the kind of individual attention from the director, associate director and staff of the Fulbright College Honors Program that delivers a memorable and productive college experience.