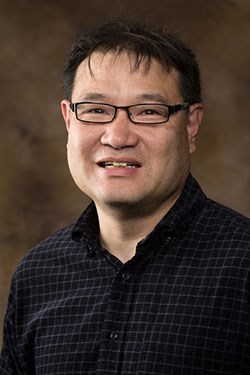 FAYETTEVILLE, Ark. — The U.S. Patent and Trademark Office has issued a patent to the University of Arkansas for a drug developed through research at the university for treatment of hair loss and other disorders.

Joshua Sakon, associate professor of chemistry and biochemistry at the U of A, is one of four co-inventors of the pharmaceutical protein now known as BMD-2341. The patent, titled “Fusion Proteins of Collagen Binding-Domain and Parathyroid Hormone,” was issued June 23 to the University of Arkansas System Board of Trustees, the Ochsner Clinic Foundation and the National University Corporation Kagawa University in Japan.

BiologicsMD, a drug discovery firm headquartered at the Arkansas Research and Technology Park, holds the exclusive license to the patented technology and is developing a line of protein therapeutics and drug/device combination products to treat hair loss and baldness.

This is the second U.S. patent awarded to Sakon and his co-inventors for the family of discoveries. In 2013, the U.S. Patent and Trademark Office awarded a composition of matter patent for the protein therapeutics for the treatment of osteoporosis and other bone maladies. BiologicsMD also holds the exclusive license for these patents.

“A derivative of the original drug has an effect in reversing or suppressing hair loss,” Sakon said. “Specifically, it could be applied to treat alopecia, a condition in which hair loss occurs in patches on the scalp, or in cases of chemically induced alopecia, which occurs during chemotherapy. The drug has been successful in treating hair loss in mice and I look forward to seeing the drug move into clinical trials.”