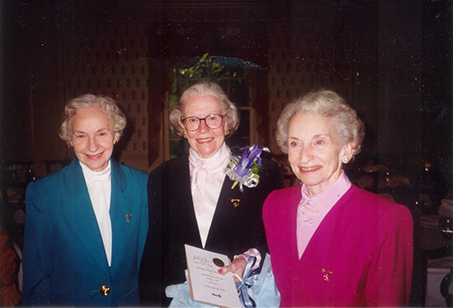 FAYETTEVILLE, Ark. — University of Arkansas alumnae and sisters Agnes Lytton, Mary Sue and Betty Lynn Reagan have designated an estate gift to the University Libraries valued at over $1.2 million. The three sisters were born and raised in Northwest Arkansas and had deep connections to history, education and library science throughout their lives. Their gift will be utilized for the purchase of library materials, such as books, periodicals and digital resources.

The University Libraries’ Special Collections Department began archiving the family’s papers in 1988. The Reagan Family Papers (MC 755) include essays, photographs, correspondence, clippings, a scrapbook, and the Mary Sue Reagan Political Collection. With this estate gift, Special Collections also received hundreds of books for the Arkansas and Rare Books collections, as well as an antique bookshelf once owned by famed Cherokee attorney E.C. Boudinot. The bookshelf currently houses an exhibit about Boudinot and is on display in the Special Collections Reading Room in Mullins Library.

“The Reagan Sisters were some of my first friends when I moved to Arkansas in 2000,” Allen said. “I found them to be charming, interesting gentlewomen who could talk on everything from politics and history to gardening and food. They were fun to be around, and they were curious about everything in the world. They were voracious readers, wonderful conversationalists and they were interested in all aspects of the university, not just the Libraries.”

All three of the Reagan sisters have strong family ties to Arkansas and attended the university.

The oldest of the three siblings, Agnes Lytton Reagan was a 1935 graduate of the J. William Fulbright College of Arts and Sciences and received a degree in mathematics. She later earned a Bachelor of Arts and Master of Arts in Library Science from Emory University and a Master of Science and Doctor of Philosophy in library science from the University of Illinois. She enjoyed a successful career as a librarian and professor, including working for the American Library Association in Chicago and the University of Texas at Austin, before passing away in December 2013 at the age of 99.

Both Mary Sue and Betty Lynn enjoyed careers as history and government teachers in the Rogers School District and accumulated 94 years of service between them. They were both honored as Teacher of the Year in Rogers, named by the Rogers Chamber of Commerce to the Educators’ Hall of Fame and received the Benton County Bar Association’s Liberty Bell Award for outstanding teaching of American history and government. They were known for being proponents of teaching Arkansas history in the curriculum and for being true teachers who carefully graded their students’ work. Their impact on the Rogers School District was so substantial that the Mary Sue Reagan and Betty Lynn Reagan Elementary School was dedicated in Rogers in 1989.

Alice “Russell” Eubanks, a next-door neighbor of the sisters for nearly 30 years, substituted for them occasionally and came to know them very well.

“They were beautiful ladies,” Eubanks said. “They had a sense of humor, enjoyed life, liked to laugh, supported their church and loved people. They always had a positive outlook on life.”

Eubanks noted that the younger two sisters – Mary Sue and Betty Lynn – were born in the house next door to her, which is now over 100 years old. Both continued to live there and take care of their childhood home until they passed away.

“There are no words that will express the value of them as human beings,” said Eubanks. “All three of them contributed highly to education.”

About the University Libraries: Located at the heart of campus, David W. Mullins Library serves as the main research library on the University of Arkansas campus. Also serving the campus community are the Robert A. and Vivian Young Law Library, the Fine Arts Library, the Physics Library, and the Chemistry and Biochemistry Library. The University Libraries provide access to more than 2 million volumes and 53,000 journals and offer individual and group research help and study spaces; computer labs with printing and scanning; interlibrary loan and RazorRush services; and cultural exhibits and events. The Libraries’ Special Collections Department acquires, preserves, and provides access to materials on Arkansas and the region, its customs and people, and its cultural, physical, and political climate. Visit the Libraries’ web page at libraries.uark.edu to learn more about services and collections.