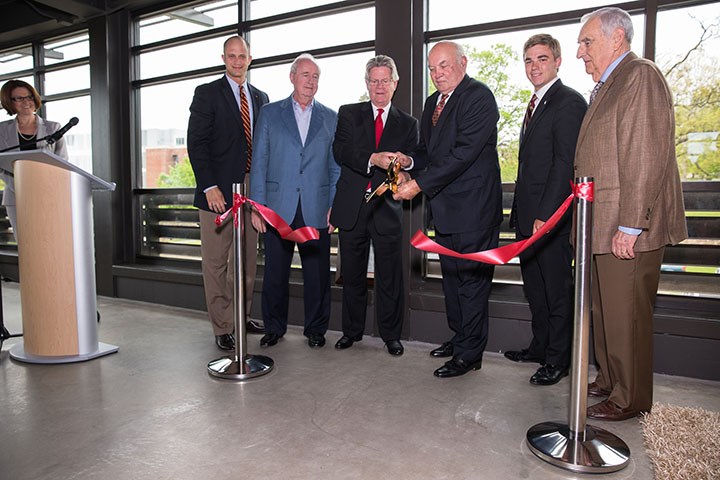 Members and alumni of the Pi Kappa Alpha Fraternity cut a ribbon to dedicate the new chapter house on Arkansas Avenue.

FAYETTEVILLE, Ark. – The Alpha Zeta chapter of Pi Kappa Alpha fraternity – or PIKE – and the Gamma Chi chapter of Lambda Chi Alpha celebrated a house dedication and groundbreaking, respectively, on the University of Arkansas campus this weekend.

"Dedicated teams of university professionals, passionate alumni and chapter memberships have been instrumental in the renovation and revitalization of these Greek houses," said Dean of Students Melissa Harwood-Rom. "Current and future students will benefit from the improvements to these signature structures. Speaking on behalf of the Division of Student Affairs, we are so very grateful to those who have contributed their time, expertise and financial support to these projects."

The renovation of the house, which was originally built more than 60 years ago, cost $7.6 million. The architect for the project was Ken Hirshey and Cyntergy AEC of Tulsa, and the builder was Jimmy Cone and the Cone Group.

Significant improvements to the house include the addition of another story to both the north and south wings of the building, enhanced student sleeping and living accommodations, a renovated chapter room and updated finishes. The house also boasts a rooftop garden and outdoor lounge overlooking Dickson Street.

"During the planning and construction phases of the renovation – when the house was closed – the chapter maintained membership and increased in number," said Harwood-Rom. "That is the greatest tribute I can pay to the strength of this brotherhood. I shall always treasure the friendships fostered by this partnership. That is the University of Arkansas for you and why I am proud to have been a part of revitalizing this beautiful house."

Over the course of the project, the building's size was increased from 15,432 square feet to 28,000 square feet, which now makes it the largest fraternity house on campus. It is also ranked No. 13 in the top 20 most impressive fraternity houses in the south by COED.com and was featured in the Pi Kappa Alpha Shield & Diamond publication in spring 2015.

"This project will certainly be a part of the Gearhart Legacy here at the university," said Brady. "It was a dynamic collaborative effort – half university and half Pi Kappa Alpha – and the results are truly remarkable. The U of A and Pi Kappa Alpha partnership will long endure and serve as a reminder that great things can happen when Greek houses and the university work together with a 'can do' attitude. We are grateful to the chancellor and to his Greek housing team for their support on this project, which means so much to the men of Pi Kappa Alpha."

Lambda Chi Alpha was founded in 1909 and established at the University of Arkansas in 1923. It recolonized on campus with 30 members in 2002 and now includes more than 170 members. In 2007, the chapter won the Grand High Alpha Award for consistent excellence in recruitment, academics and philanthropy over a three-year period.

The Gamma Chi chapter's house was built in the early 1950s and was the first fraternity house on Stadium Drive. Its renovation and expansion, which will begin immediately, is expected to cost at least $6.3 million and be completed in summer 2016. Fundraising is still ongoing, and the Walton Family Foundation has offered a matching gift toward the project.

"As we prepare to temporarily relocate the men of Lambda Chi Alpha, I am confident that their strong chapter and alumni leadership will serve them well," said Harwood-Rom. "We know that they will continue to be a top performing chapter in academics, philanthropy and leadership."

"Our chapter continues to excel in those areas," said Casey Simon, Lambda Chi Alpha alumni association president. "This house is where I met and made my best friends – friendships that will last a lifetime, as opposed to just four years. A renovated and up-to-date chapter house is long overdue, but this renovation will allow us to maintain the traditional fraternity appearance on the outside while being polished and stately on the inside."

Those interested in following along with the progress of the house renovation can visit www.arkansaslambdachi.org for updates.