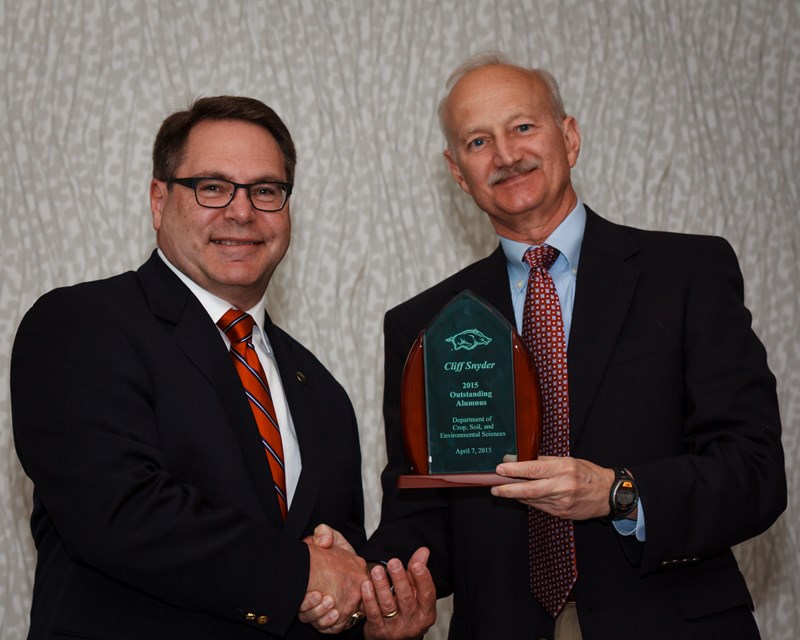 FAYETTEVILLE, Ark. – Cliff Snyder, the nitrogen program director in Conway for the International Plant Nutrition Institute, has been named the 2015 Outstanding Alumnus of the Crop, Soil, and Environmental Sciences Department in the University of Arkansas' Dale Bumpers College of Agricultural, Food and Life Sciences.

Snyder earned his bachelor's degree in agriculture in 1978 and his master's degree in agronomy in 1980, both from the U of A. He went on to earn his doctorate in soil science and forestry from North Carolina State University in 1984.

Snyder's responsibilities at the Atlanta-based Institute include coordinating efforts to deal with environmental issues related to nitrogen fertilizer use in agriculture across the country and internationally.

"We are very proud to honor Cliff as our outstanding alumnus," said department head Robert Bacon. "He is the consummate professional and has risen to prominence as seen by his service on national and international panels. We are fortunate and thankful Cliff has remained active in the state as well as with our department."

Snyder was appointed to the U.S. Environmental Protection Agency Science Advisory Board Hypoxia Advisory Panel in August 2006 and was involved in producing a 2008 report titled "Hypoxia in the Northern Gulf of Mexico." In March 2008, he was appointed to the U.S. EPA Farm, Ranch and Rural Communities Advisory Committee. He is also an invited contributor to and reviewer of reports and scientific panels on greenhouse gas emissions from cropland agriculture within the U.S. Department of Agriculture and the EPA. Snyder has provided scientific and technical advice on greenhouse gas emissions, water quality, soil organic carbon, and nutrient management to the Field to Market Sustainability Alliance and other organizations. He is a member of the Science Advisory Committee of the International Nitrogen Initiative, and an invited member of the United Nations Environment Program Steering Committee addressing global nitrous oxide emissions.