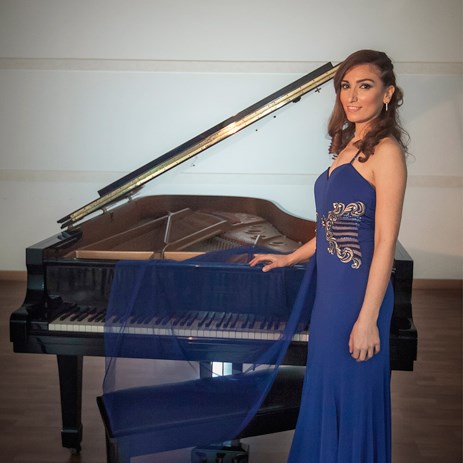 Balabanian will also present a lecture titled "West Meets East: Classical Music and Culture in Lebanon" Monday, March 2 at 12:30 p.m. in Old Main Room 421. Both events are free and open to the public.

Acclaimed for her passionate performances, beautiful sound, wide palette of tonal colors, and deep lyricism, Balabanian is a pianist with a growing career as a soloist and chamber musician. Praised by the "Agenda Culturel" for demonstrating the "exciting temperament of a magnificent concert pianist," Balabanian has captured numerous prizes and awards, including first prize at the Margot Babikian Chamber Music Competition (Beirut 2010) and second prize at the Schubert Piano Competition (Beirut 1997), and has participated in international music festivals and workshops.

Born in Beirut, Balabanian began piano studies at the age of 5. As a recipient of a full summer scholarship from the Playing for Peace Festival (New Hampshire, 2001), and a partial scholarship from the International Keyboard Institute and Festival (New York, 2006), Balabanian has participated in several international music festivals and workshops such as the International Piano Academy (Freiburg 2014) and the Euro Arts Music Festival (Leipzig 2009), and has also studied with world famous pianists and pedagogues. Balabanian performs frequently with chamber groups and currently teaches piano at the National Higher Conservatory of Music in Beirut, Lebanon.

Her concert, sponsored by the Fulbright College Piano Performance Program in partnership with the King Fahd Center for Middle East Studies, will include works by Aram Khachaturian, Boghos Gelalian, Edvard Mirzoyan and other notable Armenian composers who adapted local and regional folk tunes and melodies into Western classical composition.

For concert information, please contact Jura Margulis, McAllister professor of piano, at 479-575-4178 or margulis@uark.edu. For lecture information, contact the King Fahd Center at 479-575-2175.