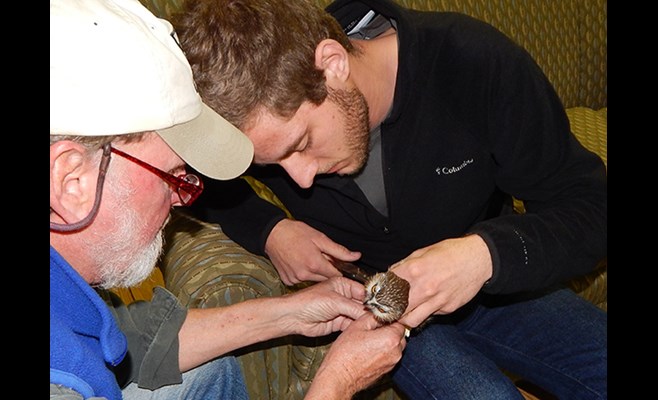 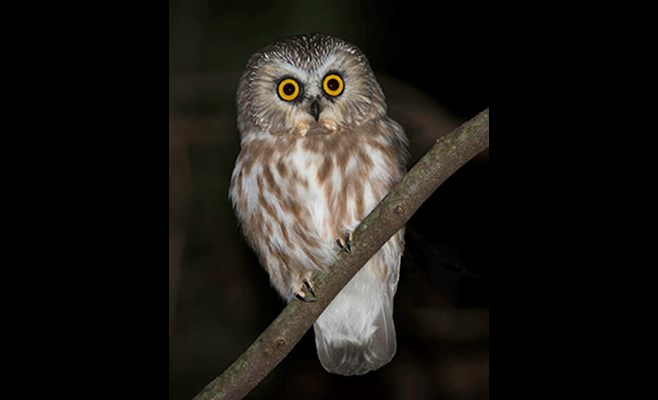 A female northern saw-whet owl, "sitting pretty on a branch," after it was released by researchers. Photo by Mitchell Pruitt. 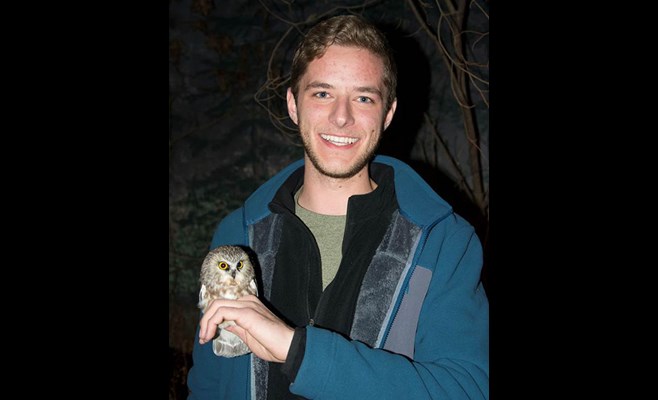 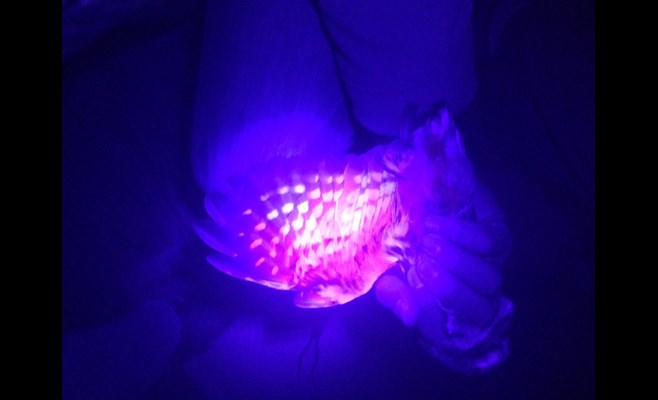 Mature northern saw-whets can be distinguished from juveniles by flashing a black light on the underside of the wing. Photo by Mitchell Pruitt. 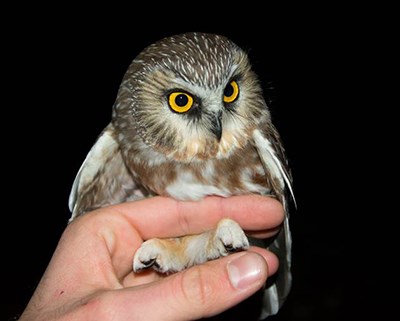 FAYETTEVILLE, Ark. – Wildlife biologists at the University of Arkansas have captured and documented the first northern saw-whet owl in Arkansas.

Between 1959 and 2010, only a dozen sightings of this rare bird – much smaller than screech, barred or great horned owls – had been recorded in the state prior to the adult female recently captured by Kimberly Smith, University Professor of biological sciences, and Mitchell Pruitt, an Honors College undergraduate student majoring in crop, soil, and environmental sciences.

Using mist-nets, a technique that includes a fine-gauge, black nylon net to ensnare birds, the researchers captured and banded the owl at the Ozark Natural Science Center near Huntsville in late November. Alyssa DeRubeis, a naturalist and teacher at the center, assisted Smith and Pruitt, who had previously tried the method at other locations in Northwest Arkansas, including Devil’s Den State Park.

The northern saw-whet, whose habitat is typically the northern United States and along various ranges of the Appalachian Mountains, is a small, secretive species that prefers low, brushy areas, especially cedar forests. They eat mice and spend their days silently perched at eye level in trees. Their main predators are other species of owls – barred and great horned owls.

During winter, northern saw-whets are usually silent and difficult to locate, so little is known about their winter distribution. However, recent successes at banding stations in Missouri and Alabama caused Smith and Pruitt to suspect the birds might also occur in Arkansas.

“An interesting thing about saw-whets is some of them migrate south every year, even when there’s plenty of food up north,” said Pruitt, who will use the experience and research for his honors thesis. “This year food must have been abundant because capture rates have been down across the country. But some birds have trickled through.”

The researchers attracted the bird by playing a recording of the northern saw-whet’s call. Once captured, they examined the bird and took measurements, showing a large female adult in its second year of life; it weighed 86 grams (3 ounces) and had a closed wing-chord of 142 millimeters (5.6 inches). Males and females are distinguished by a combination of weight and wing length.

Mature northern saw-whets can be distinguished from juveniles by flashing a black light on the underside of the wing. Like several other owl species, saw-whets have fluorescent pigments called porphyrins under their wings, and the patterns differ between juvenile and adult birds, Smith said.

The researchers banded the bird to track its migratory pattern, which will help biologists determine where the birds are wintering. After banding and photographing the bird, the researchers released it. The owl then perched for 10 minutes on a nearby branch, and the researchers took one more photograph before it flew away.

Two weeks after the initial capture, Smith and Pruitt captured another adult female at the Ozark Natural Science Center.

“The fact that we were able to capture two birds in the same place within two weeks of each other is really incredible, given that this owl has only been seen in Arkansas about a dozen times in the last 55 years,” Smith said. “Even more unbelievable is that we have had three owls respond to our tape recording at the Science Center, suggesting that this owl might be much more common in Arkansas than previously thought.”

The researchers will continue their late-night study through spring this year and will repeat netting next fall and winter.

Unless one is a master bird bander, trapping or possessing migratory birds is illegal in the United States, Canada and Mexico. Smith is a master bird bander, licensed by the federal government. He also has an Arkansas Game and Fish Commission permit, an Arkansas Natural Heritage permit and permits from both the National Park Service and Arkansas State Parks. Pruitt is training to become a sub-permit holder.