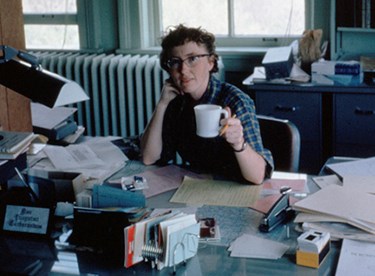 FAYETTEVILLE, Ark. – Hester A. Davis, Arkansas’ first State Archeologist, died Tuesday Dec. 30, 2014, in Fayetteville, Arkansas. She was 84 years old. A memorial event will be held in her honor from 1-3 p.m. Saturday, Feb. 21, in Giffels Auditorium. Attendees are encouraged to bring memorabilia to celebrate Davis’ many contributions and interests.

“Hester Davis embodied the land-grant university mission of teaching, research and service,” said Todd Shields, dean of the J. William Fulbright College of Arts and Sciences, which is home to both the University of Arkansas Museum and the Department of Anthropology. “She was a beloved professor, conducted research in public archeology that ensured the preservation of a cultural legacy that might have otherwise been lost, helped pass legislation for historic preservation and endowed a graduate internship that will continue to produce caring and effective archeologists.”

Among her many acts of service to her field, Davis was a founding member of the National Association of State Archaeologists, the American Society of Conservation Archaeology, the Society of Professional Archaeologists and the Arkansas Archeological Society. She was a committee member and officer of many organizations. On the international level, Davis was a member of the U.S. Committee for the International Council on Monuments and Sites. She was appointed by President Bill Clinton to the Cultural Properties Advisory Committee of the United States Information Agency. Upon her retirement in 1999, Davis created the Davis Internship in Public Archeology, an endowment that has helped 10 students achieve advanced degrees in anthropology.

“It is a commonplace understanding now that the preservation of archeological sites will go nowhere in the absence of strong public support, and to cultivate that support scholars need to develop the skill to speak to and work directly with diverse public audiences, including descendent communities,” said George Sabo III, professor of anthropology and environmental dynamics and director of the Arkansas Archeological Survey. “Beginning very early in her career, Hester provided the best example of how to do that.”

Among her many honors are two distinguished service awards from the Register of Professional Archeologists, one of which bears her name. Among her most prized recognitions was the “Best Damn State Archeologist Award” given by the National Association of State Archaeologists in recognition of her retirement.

“Hester Davis had so many accolades, awards and accomplishments that it would take several pages to list them all,” said Ann Early, Davis’ successor and Arkansas’ current State Archeologist. “On a personal level, she was instrumental in making the field more welcoming to women. Thanks to Hester and her fellow pioneers, women have a larger part in American archeology.”