Architect Michael Murphy to Present 'Beyond the Building' Lecture on Jan. 26 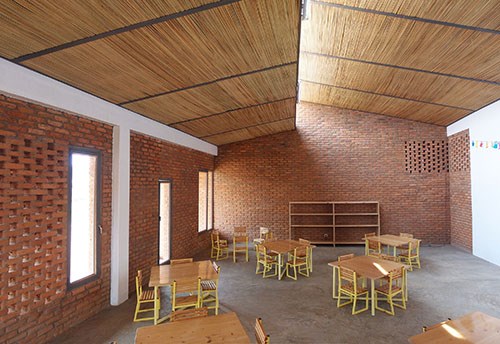 FAYETTEVILLE, Ark. – Michael Murphy will present a lecture titled “Beyond the Building” at 5 p.m. Monday, Jan. 26, in Ken and Linda Sue Shollmier Hall, Room 250 of Vol Walker Hall, on the University of Arkansas campus in Fayetteville, as part of the Fay Jones School of Architecture lecture series.

Murphy, an architect by training, graduated from the University of Chicago and Harvard University’s Graduate School of Design. He is the executive director of MASS Design Group, which he co-founded with Alan Ricks in 2010. Since leading the design and construction of the critically acclaimed Butaro Hospital in Rwanda, Murphy has become a thought leader in architecture and healthcare design.

MASS Design Group is a nonprofit architectural firm based in both Boston and Kigali, Rwanda, that aims to improve people’s lives through design and to be an example for how designers can rethink their role in the world. Their work, spanning across Africa, Haiti, and the United States, focuses on leveraging architecture to become an engine for better health, economic growth, and long-term sustainability. The firm’s philosophy about architecture hinges on the adage that design is never neutral; it can either help or it can hurt, and MASS judges success by evaluating the degree to which radical improvement on community health is produced.

By applying holistic thinking and focusing on the process of constructing a building as much as – if not more than – the physical building itself, architects have the ability to not only design the built environment, but also to build capacity, create dignity, and empower. MASS Design Group combines innovative and appropriate design with immersive research and uses the design process to capitalize on local educational opportunities to generate systemic change, break the cycle of poverty, and ultimately create buildings that heal.

Murphy regularly speaks to a variety of audiences on how architecture can improve people's lives, and he sits on the boards of the Clinton Global Initiative Advisory Committee and the Center for Healthcare Design, among others. Murphy also works to spread MASS’s design philosophy through a variety of mediums. He is a Rainer Arnhold Fellow with the Mulago Foundation, a member of the Social Venture Network, and is published in The Huffington Post, The Journal of Architecture and the Stanford Social Innovation Review. The first book from MASS, Empowering Architecture, was published in 2012 as a reflection on the Butaro Hospital design process. MASS has been featured in Wired magazine, The New York Times, Fast Company and The Boston Globe, and in architecture publications including Mark, Architectural Record, Detail, Domus and Lotus.

Murphy was recently listed in the Atlantic Monthly as one of the “Greatest Innovators of Today.” Under leadership by Murphy and Ricks, MASS has been named a finalist for the TED Prize, The Aga Khan Award for Architecture and the Buckminster Fuller Challenge. The firm has received accolades that include the World Architecture News Burro Happold Award, The Architectural League of New York: Emerging Voices Award, Healthcare Design Changemaker Award, the Curry Stone Design Prize and Contract magazine’s “Designer of the Year.”

The public is invited to attend this lecture, which is the Lewis Architects Engineers Lecture.

Admission is free, with limited seating. For more information, contact 479-575-4704 or architecture.uark.edu.