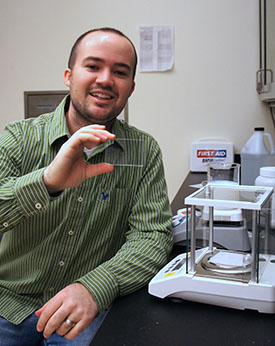 Corey Thompson holds a piece of glass that has been coated with the WattGlass coating.

FAYETTEVILLE, Ark. – WattGlass, a company founded by a graduate of the University of Arkansas, has received a $150,000 grant from the National Science Foundation to further develop a nano-particle coating for glass, which makes the glass anti-reflective, self-cleaning and highly transparent.

“We’re particularly interested in solar panels because they collect dust, dirt and grime, which reduces output and increases the cost per watt,” said Corey Thompson, chief technology officer of WattGlass, adding that the coating has many other applications.

“Right now, we’re dipping microscope slides into the coating liquid, but the main goal with this grant is to show that we can do the same thing on a larger scale with standard commercial coating equipment,” Thompson said.

The NSF Phase I Small Business Innovation Research grant will be used to scale up the product, making it a more viable technology. WattGlass is a Genesis Technology Incubator client at the Arkansas Research and Technology Park.

The project also aims to prove the product is durable when exposed to heat, dust, dirt and other desert elements. If both objectives are successful, the company will be able to apply for NSF Phase II funding of up to $750,000.

Thompson began this research more than three years ago when he started working on his doctorate in microelectronics-photonics at the University of Arkansas.

“We’ve been pursuing commercialization of this technology for almost a year with limited funds and limited resources,” he said. “The ability to make progress is significantly increased with this support from the National Science Foundation. It also gives me the opportunity to stay in Arkansas with my Ph.D., create my own Ph.D. position and hire another Ph.D. student part-time. I’m really proud of that.”

The initial research for the product was conducted at the Nanomechanics and Tribology Laboratory and Vertically-Integrated Center for Transformative Energy Research – both at the U of A – and supported by the National Science Foundation and the Arkansas Science and Technology Authority.