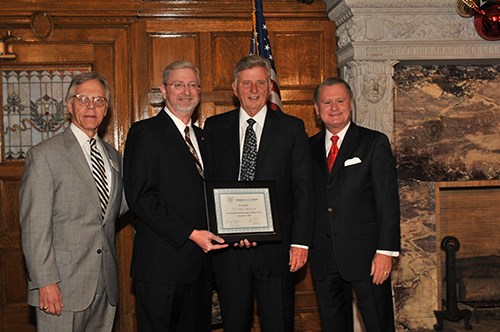 FAYETTEVILLE, Ark. – On Dec. 3, the Arkansas Research Alliance announced that Alan Mantooth, Distinguished Professor of electrical engineering and holder of the Twenty-First Century Endowed Chair in Mixed-Signal IC Design and CAD, was one of its five inaugural fellows.

The ARA Fellows program is a companion to the well-established ARA Scholars program, which recruits research talent to Arkansas. The fellows program recognizes distinguished university research leaders from each of the five research universities in Arkansas. ARA Fellows are nominated by his or her chancellor and receive a $75,000 grant paid over three years.

“The Fellows are proven research leaders and highly regarded at their respective universities, and they share the same vision as the ARA Scholars: to impact Arkansas through innovative research with commercial applications,” stated Jeff Gardner, president and chief executive officer of Windstream and chairman of the ARA board of trustees.

U of A Chancellor G. David Gearhart introduced Mantooth at the announcement event.

“Dr. Mantooth is a true academic all-star, and wears a number of hats on our campus,” said Gearhart. “Over the course of 16 years, he has worked with nearly 90 graduate students and personally mentored more than 150 students, overseeing in excess of $50 million in research funding.”

“I’d like to congratulate Dr. Mantooth on this honor,” said John English, dean of the College of Engineering. “His research focuses on areas that have great potential for technological and economic impact in the state of Arkansas, and his work with industry to bring these projects to commercialization is definitely deserving of recognition.”

Electronics designed by Mantooth and his team have flown on the International Space Station, surviving extreme temperatures and radiation. Their latest achievements can survive extremely high temperatures, such as those found in deep well drilling or vehicular engine compartments.

Recently, Mantooth’s team was acknowledged for the second time in the last five years with an R&D 100 Award, for an electronic charger they designed for Toyota’s plug-in electric vehicles. Financial resources for his research have included awards from the National Aeronautics and Space Administration, the Defense Advanced Research Projects Agency, the Office of Naval Research, Department of Energy, the National Science Foundation, and more than 50 companies.

Mantooth has also dedicated a part of his career to the transfer of research results into daily use by founding or nurturing three startup companies in Arkansas.

Mantooth is a fellow if the Institute of Electrical and Electronics Engineers. He received a doctorate in 1990 from the Georgia Institute of Technology. He earned a bachelor’s and master’s degree in electrical engineering from the U of A in 1985 and 1986.