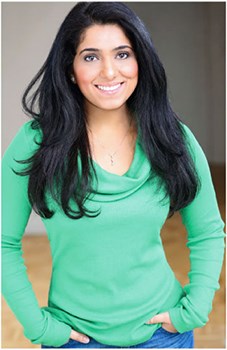 FAYETTEVILLE, Ark. –Writer and actress Aizzah Fatima will perform her one-woman comedy, Dirty Paki Lingerie, at 7 p.m. Thursday, Nov. 6 in Giffels Auditorium in Old Main at the University of Arkansas. The performance is free and open to the public, but seating is limited. Doors open at 6:30 p.m.  A light reception will follow the event.

The event is presented by the King Fahd Center in the J. William Fulbright College of Arts and Sciences.

Dirty Paki Lingerie is set in post 9/11 America and depicts the stories of six Pakistani-American Muslim women at the chaotic juncture of two different cultures. The characters range in age from a six year old girl to a sixty-five year old woman. Cross-cultural sparks fly and preconceptions about Muslim women, sex, and politics are humorously shattered in the show.

The one-woman play has been called a “must-see” production by critics, and The Wall Street Journal says it “Breaks down stereotypes of Muslim women in America.” Dirty Paki Lingerie transcends boundaries of culture, religion, and gender and has played to sold-out houses in New York City, Toronto, Pakistan, and the Edinburgh Fringe Festival. It is an entertaining mosaic of the sublime, the comic, the poetic, and the political.

Fatima will also take part in a special Nadi Cinema screening of director Chris Morris’ 2010 film Four Lions about a group of hapless British jihadis set out to wreak havoc in their native country. The screening will take place at 7 p.m.  Nov. 5 in the Hembree Auditorium, Agriculture Building room 107E.  This event is also free and open to the public.

Fatima will speak with students in a workshop ‘On The Road with Dirty Paki Lingerie’ at noon, Thursday, Nov. 6 in the International Students and Scholars classroom in Holcombe Hall. This workshop will continue the discussion of religious, gender and ethnic stereotypes in America, and the difficulties and opportunities in taking a show like Dirty Paki Lingerie to audiences abroad  Contact Nani Verzon the King Fahd Center to register at hverzon@uark.edu or 479-575-2175.

Aizzah Fatima is a writer and actress who has appeared in numerous theatre productions, as as the hit Pakistani TV series Mata-e-jaan. Other U.S. TV credits include: The Good Wife on CBS, Patrice O’Neil’s Guide to White People onComedy Central and, Food Detectives with Ted Allen on the Food Network. More details are available at www.AizzahFatima.com

The King Fahd Center for Middle East Studies is an academic and research unit in the J. William Fulbright College of Arts and Sciences at the University of Arkansas. An interdisciplinary and interdepartmental area studies center that offers diverse cultural, intellectual, and educational opportunities for the University of Arkansas community, it promotes research and teaching in interdisciplinary Middle East studies. More information about the King Fahd Center can be found at http://mest.uark.edu.