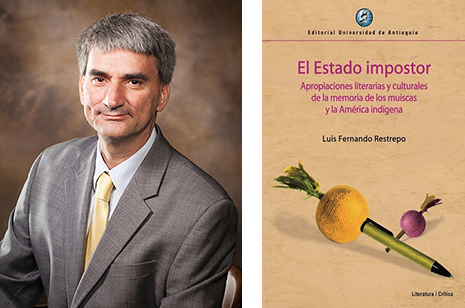 “I am deeply honored to receive this award,” said Restrepo. “I consider it one of the highlights in my career as a researcher. I am a specialist in colonial Latin America and throughout my career I have focused on the relationship of literature and human rights, examining the aesthetic and ethical implications of the representation of violence and the suffering of others. This book is an effort to reconnect the history, literature and art of my native Colombia with the contemporary conflict of its indigenous peoples.”

The book examines the literary and artistic representations of the conquest of what is now Colombia, from the colonial period to the present, particularly in relation to current efforts of the indigenous communities to receive cultural and political recognition from the Colombian state and society at large. Restrepo spent ten years researching and writing the book, visiting Colombia many times during this period.

The award committee called El Estado impostor a well-documented interdisciplinary study, drawing from historiography, postcolonial studies and trauma studies, that “bridges the academic and the social to present a critical perspective of Western culture’s policies aimed at the incorporation and exclusion of indigenous America.”

The International Institute of Latin American Literature was founded in 1938 in Mexico City and its current home is at the University of Pittsburg. It is dedicated to creating an international awareness of Latin American literature, culture, and criticism through its scholarly conferences and its publishing lines.

Luis Restrepo joined the U of A faculty in 1995 as an assistant professor of Spanish, specializing in colonial Latin American literature and culture. He became a professor in the Department of World Languages, Literatures and Cultures in 2005. He has also been actively involved in diversity programs at the university, as founding director of the Office of Latino Academic Advancement and Community Relations, co-director of the service learning program Sin Limites: The Latino Youth Biliteracy Project, and currently as assistant vice chancellor of diversity and community. He was also appointed by Gov. Mike Beebe to serve on the Arkansas Department of Education Commission on Closing the Academic Achievement Gap.

Restrepo earned his bachelor’s degree in philosophy and literature at the Pontificia Bolivariana, and his master’s and doctorate in Spanish at the University of Maryland.