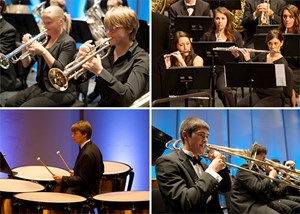 Three of the concerts will feature the works of Carter Pann, who will be serving as composer in residence April 12-14. Pann will also perform with the Wind Ensemble and Wind Symphony.

Pann’s music has been performed by many ensembles around the world including the London Symphony, Berlin-Stockholm-Finnish Radio Symphonies, Seattle Symphony and National Symphony of Ireland. His work has earned five composer awards from the American Society of Composers, Authors and Publishers, and his Piano Concerto, recorded by the Czech State Philharmonic of Brono, was nominated for the “Classical Composition of the Year” GRAMMY in 2001.

The concerts are presented by the department of music in the J. William Fulbright College of Arts and Sciences as part of the Joy Pratt Markham Series. The public is invited and admission is free.

The programs are as follows: