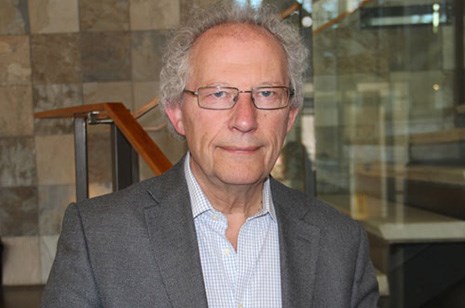 FAYETTEVILLE, Ark. – The Right Honorable Henry McLeish, who has had a distinguished career in British and Scottish politics and education, will speak at the University of Arkansas about the role of learning in modern society, making comparisons between the United States and countries in the European Union.

McLeish’s lecture is at 5:30 p.m. Tuesday, March 11, and is sponsored by the Osher Lifelong Learning Institute at the University of Arkansas. It is free and open to the public and will take place in the U of A Global Campus auditorium at 2 E. Center St. in Fayetteville.

McLeish first came to the University of Arkansas in 2004 as inaugural holder of the Hartman Hotz Visiting Professorship in Law and Liberal Arts. During his time on campus, he developed a short course in European Union Studies and the Law. Since then, he has visited campus several times, delivering lectures and speaking to groups in several colleges. He has spoken this semester with students, faculty and staff about such topics as international health and education policy.

The Osher Lifelong Learning Institute, based in the College of Education and Health Professions at the University of Arkansas, is a member-driven, nonprofit organization made up of adults over 50 who explore intellectual and cultural topics of interest. It is offering more than 80 non-credit classes this spring.

While the lecture is free and open to the public, a reception requiring tickets is also planned at the Chancellor Hotel after the lecture from 6:45 to 8:30 p.m. Tickets are $45 for individuals and $85 for couples with proceeds going to support the Osher Lifelong Learning Institute’s scholarship fund. For more information, call 479-575-4545, email olli@uark.edu or visit olli.uark.edu.