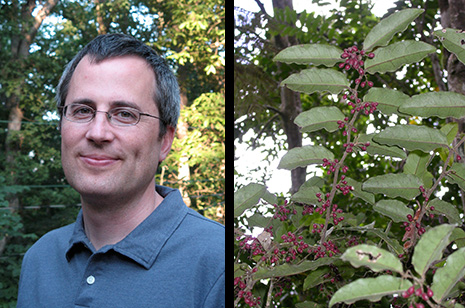 FAYETTEVILLE, Ark. – A new study has uncovered an unprecedented example of horizontal gene transfer — the acquisition of foreign DNA from different, unrelated species — in a South Pacific shrub that is considered to be the sole survivor of one of the two oldest lineages of flowering plants.

The research also shows, for the first time, that an organelle genome has captured an entire foreign genome, in this case, at least four of them. It is also the first description of a land plant acquiring genes from green algae.

A full description of the study of Amborella trichopoda will be published in the Dec. 20 issue of the journal Science, in an article titled, “Horizontal Gene Transfer of Entire Genomes via Mitochondrial Fusion in the Angiosperm Amborella.”

Andrew J. Alverson, an assistant professor of biological sciences in the J. William Fulbright College of Arts and Sciences, has been working on this project since his arrival at the University of Arkansas in 2012. The study, led by scientists at Indiana University, also included researchers from the U.S. Department of Energy, Pennsylvania State University and the Institute of Research for Development in New Caledonia, an archipelago located 750 miles east of Australia where Amborella is endemic.

Alverson performed the computational analyses that identified the many donors of this foreign DNA, which includes entire mitochondrial genomes from three green algae and one moss. Amborella is the “last man standing” in one of the two oldest flowering plant lineages. The other lineage comprises the remaining 300,000 species of flowering plants.

“The Amborella mitochondrial genome is huge, and most of its DNA is foreign, acquired from the mitochondrial genomes of other plant species,” Alverson said. “We’ve never seen horizontal gene transfer at this scale. It’s not acquiring genes or bits of genes in a piecemeal way. It’s been swallowing up whole genomes. One of our main tasks was to determine the ancestry of its several hundred ‘extra’ genes.”

The plant’s mitochondrial genome is unusual for at least three reasons, Alverson said.

“Ecologically, it has greater exposure to the foreign mitochondria of epiphytes and parasites than most plants,” he said. “Developmentally, Amborella has a greater chance of incorporating this DNA in a new germline due to the plant’s propensity to respond to wounding by forming new germlines (meristems) and branches (called suckers). Molecularly, there is a greater chance of keeping this DNA due to its exceptionally low rate of DNA loss.

“One of the really interesting things about Amborella is that although it is loaded with all of this extra DNA, most of it is junk,” Alverson said. “The genes are degenerated and nonfunctional. Amborella is a hoarder. Its genome is a museum of dead DNA.”

Indeed, Jeff Palmer, Distinguished Professor of biology at Indiana University, a lead researcher in the study, said this incompatibility “provides the major barrier to unconstrained mitochondrial ‘sex’ across the evolutionary tree of life.” Palmer was Alverson’s postdoctoral adviser at Indiana.

“The Amborella mitochondrial genome is like the old lady in the song who swallows a fly, and then a spider, a bird, a cat, etc., all the way to a horse, at which point, finally, ‘she's dead of course,’” Palmer said. “Likewise, the Amborella genome has swallowed whole mitochondrial genomes, of varying sizes, from a broad range of land plants and green algae. But instead of bursting from all this extra, mostly useless DNA, or purging the DNA, it’s held on to it for tens of millions of years. So you can think of this genome as a constipated glutton, that is, a glutton that has swallowed whole genomes from other plants and algae and also retained them in remarkably intact form for eons.”