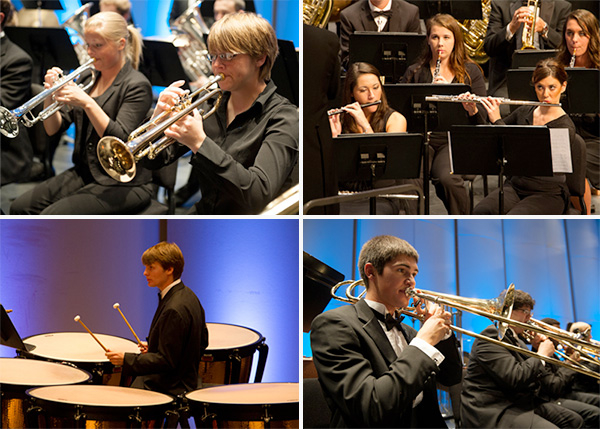 FAYETTEVILLE, Ark. – The University of Arkansas Wind Ensemble and Wind Symphony will close the fall concert season with performances at the Fayetteville High School Performing Arts Center at 7:30 p.m. Monday, Nov. 25. ­­­­The concerts are presented by the department of music in the J. William Fulbright College of Arts and Sciences as part of the Joy Pratt Markham Series. The public is invited and admission is free.

"In commemoration of the fiftieth anniversary of the death of John F. Kennedy and the sesquicentennial anniversary of the Abraham Lincoln's Gettysburg Address, the UA Wind Ensemble will present a program of all-American music," said Christopher Knighten, director of university bands.

Knighten, conducts the Wind Ensemble, with a selection conducted by Jamal Duncan, assistant director of bands. The program also features narration by guest artist Henry Runkles, instructor and piano director in the department of music.

The Wind Symphony will perform Selections from the "Danserye" by Tielman Susato (ca. 1500–ca. 1561) and close their portion of the concert with "Sonoran Desert Holiday" by Ron Nelson.

"The 'Danserye' is a set of Renaissance instrumental dances based on popular tunes of the middle sixteenth century, composed or arranged by Susato, and published in 1551 as 'Het derde musyck boexken,'" said Warren. "'Sonoran Desert Holiday' is a quasi-progammmatic piece, the final in a series of eight overtures, which began in 1953 with 'Savannah River Holiday.'  Although no specific program is intended, there are gestures and allusions to night, to sunrise, to Native American and Hispanic influences, to wide open southwestern expanses, and to the remarkable variety of holiday experiences available in this diverse and beautiful part of our country."

The Wind Ensemble's performance of Scott McAllister's Gone will be the Arkansas premier.

"Scott McAllister is a dynamic, young composer on the faculty at Baylor University," said Knighten. "Gone is meant to musically symbolize the loss of innocence in response to unforeseen challenges."

"The program will conclude with one of the most iconic and recognizable works of American music:  Aaron Copland's, Lincoln Portrait," said Knighten. "The narration of this piece is taken directly from Lincoln's own speeches, including the Gettysburg Address, and will be performed by professor Henry Runkles."