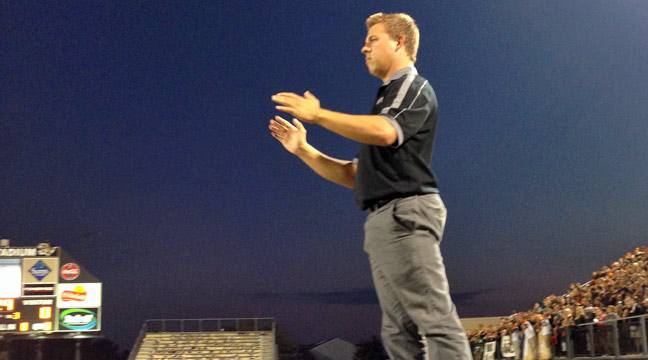 "The Wizard of Oz music is so familiar and engaging that we just couldn't pass up this opportunity to present it to our fans," said Ben Chamberlain, director of athletic bands. "The musical Wicked is a beautiful extension of the story, and at the suggestion of our designer and color guard instructor Trey Antonetti, we decided to develop the show with Stephen Schwartz's incredible music."

The show's first performance, in conjunction with the Razorback Marching Band's senior day, will be Saturday, Nov. 2, at Donald W. Reynolds Razorback Stadium as the Arkansas Razorbacks host Auburn University.

The band's second production of the Yellow Brick Road Show will be Saturday, Nov. 23, at War Memorial Stadium in Little Rock as the Razorbacks play Mississippi State University. The show will also pay homage to Zachary Roddy, an assistant band director at Bentonville High School who was killed in a car accident in October.

"This is an incredibly powerful program. It presents our greatest challenges of the year, both musically and visually, which is a great thing for the Razorback Marching Band," said Chamberlain. "Closing with Over the Rainbow-a transcendent, timeless song-not only fits the show, but also felt right as a tribute to Zach's memory."

The Razorback Marching Band is part of the department of music in the J. William Fulbright College of Arts and Sciences. Chamberlain directs more than 340 student members representing every college within the university. The marching drill was written by W. Dale Warren, senior wind band conductor and professor of music.