U of A Professor, Alumnus Latest Members of Arkansas Jazz Hall of Fame 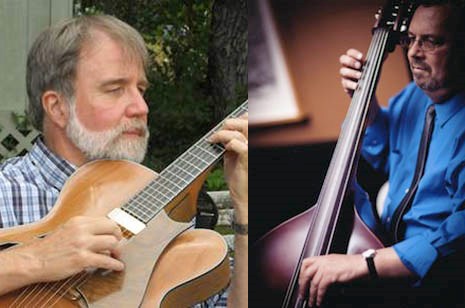 FAYETTEVILLE, Ark. – University of Arkansas music professor James Greeson, a nationally respected jazz guitarist and composer, and U of A graduate Joe Cripps, music teacher, band director, and well known “sideman” on bass and tuba, were inducted into the Arkansas Jazz Hall of Fame on Monday, Dec. 17, at The Afterthought in Little Rock. The celebration of music and musicianship is hosted every two years by the Arkansas Jazz Federation to honor outstanding contributions to the world of jazz by those with Arkansas connections.

Greeson’s compositions have been performed throughout the United States, including Carnegie Hall. He has performed as a guitarist or bassist with many important current jazz musicians, including Nnenna Freelon, Randy Brecker, Chris Potter, Bruce Barth, Mulgrew Miller and Bob Dorrough. Many of his jazz band scores have been played throughout the region, some of which are published by the University of Colorado Jazz Press.

He has also scored more than 15 documentary films broadcast nationwide on PBS. Four of his soundtracks have been nominated for Emmy Awards, and in 2009 his score for The Buffalo Flows received a mid-America regional Emmy Award.

“I have the deepest appreciation for Jim Greeson’s many gifts as a musician,” said Larry Foley, professor of journalism and producer of many documentary films scored by Greeson. “Every time he composes a new score for one of my films, I think it his best yet. And the next time, he outdoes himself, yet again. I’m so very happy that he is receiving this much-deserved honor.”

Some of Greeson’s U of A students have gone on to become active performers, educators and writers across the United States; one has even emigrated to China, where he is pursuing his musical career.

Joe Cripps has played classical, rock and bluegrass music in a professional career that began more than 40 years ago while he was still a student at Springdale High School. He even played tuba in the Razorback Marching Band as a U of A student in 1972. But his first love and main musical focus is jazz. He’s played a variety of styles — small combo, big band and traditional Dixieland. He is a master of the upright bass, the electric bass and the tuba. He has been known to tell people that he “wanted to have all the basses covered.”

Cripps became a noted sideman in the Little Rock jazz community while playing for a decade with the Art Porter Trio. He recently retired from performing after five years with the Ted Ludwig Trio, four of those performing regularly at the Capitol Hotel in Little Rock.

Cripps began giving private lessons to promising young students in Northwest Arkansas while still working professionally. He moved to Little Rock and in 1983 began working in the school system, serving as band or orchestra director at several Pulaski County schools. He was the orchestra director for 17 years at Booker Arts Magnet Elementary. He retired from teaching last year.